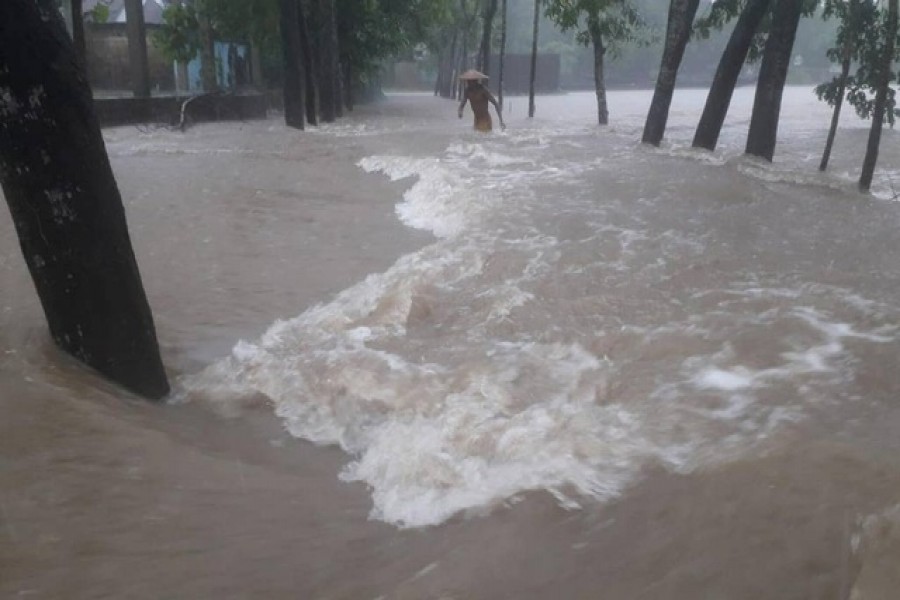 Heavy rains and flash floods from the upstream have left millions of people in Sylhet and Sunamganj districts stranded and a large number of them are without power, bdnews24.com reports.

The worst flooding in years forced the authorities on Friday to close MAG Osmani International Airport in Sylhet and the educational institutions in the affected areas where mobile networks were also down for many with the situation likely to worsen.

Sunamganj has been completely disconnected from the rest of the country. Road links to Sylhet also started to collapse after floodwater submerged the roads.

The education ministry postponed Secondary School Certificate and equivalent exams across the country that were scheduled to begin on Sunday due to the floods.

As the disaster management and relief ministry began its work, the government deployed troops to speed up flood rescue and relief efforts.

“The main challenge is to rescue people and bring them to safety,” said Sylhet Divisional Commissioner Muhammad Mosharrof Hossain, according to whom 16 of the 40 Upazilas in the four districts of the division are completely without electricity.

“We’re prepared to tackle the situation. Now the most necessary thing is to rescue the affected people. We’ve asked [local offices] to rent as many boats as needed, and allocated funds for this,” said Atiqul.

Parts of Sylhet city, including Ghasitula, Shamimabad and Taltala, were waterlogged on Friday, with residents facing hardship as water entered their homes.

Aminul Islam Polash, a resident in Shahajalal Upasahar, said that most of the roads in his area were submerged on Wednesday afternoon and at night the waters reached his home. The water level at his home has been rising ever since. Houses are reeling from power outages and a lack of fresh water.

Rashid Ahmad, a resident of the Sheikhghat in Sylhet, said: “Floodwaters entered my house for the second time in a month. We’re not wealthy. Water damages our belongings in the house and contributes to our sufferings.’’

Ismail Ali, a resident of the Ranikhail area in Sylhet’s Companiganj Upazila, said: “We have seen many floods. Where will I go with my family?”

The Sylhet City Corporation has opened 31 shelters as the flood is getting worse in the city, Mayor Ariful Haque Choudhury said, adding that a lot of the people are reluctant to come to shelters without their furniture and other belongings.

The tin-shed house of Selim Mia, a Haji Para resident in Sunamganj, went underwater on Thursday afternoon. He took shelter, along with his family, at a two-storey building owned by his neighbour.

"I’ve never seen such terrible flooding in Sunamganj in the 50 years of my life. The whole town is inundated. There is no place left for people to take refuge. A shelter is now more important than aid," he said.

A crisis of daily necessities and medicine is getting worse as stores are being inundated. The support system has collapsed in the region.

"No place is left for people to take shelter," Sunamganj Municipality Mayor Nader Bakht said. "The entire town is flooded. People are stuck at home. We are trying our best to rescue them. We need more boats now."

‘LEARN TO LIVE WITH FLOODS’

The disaster management and relief ministry said 26,000 packets of food have been allocated for the flood-affected people. Each packet contains enough rice, lentil, oil, salt, sugar and other foodstuffs for a family of five to eat for a week, according to a statement from the ministry.

The government also allocated Tk 6 million cash for the victims of the flood.

The Inter-Services Public Relations Directorate said the army was engaged in the rescue operation, efforts to select temporary shelters and ensure food, drinking water and medical services for the people, and to help the civil administration protect food silos, power stations and other key establishments.

Floodwaters have entered the Sylhet Kumargaon power station, which supplies electricity to Sylhet and Sunamganj districts. Power distribution has been suspended in Companiganj, Kanaighat, Jaintiapur and Gowainghat Upazilas as a result.

Suranjit Singh, an engineer at the Kumargaon power station, said: “Water entered the switchyard of the Kumargaon 132/33 KV grid substation. If the rains continue at the current rate, water may soon enter the control room. We have no option but to cut power to all of Sylhet.”

State Minister for Power, Energy and Mineral Resources Nasrul Hamid Bipu said power will be restored after the flood situation improves. He apologised for the inconvenience, urging the residents to have patience.

It has been raining in Sunamganj since Thursday. The met office has forecast more rain on Friday, which might worsen the flood situation in Sunamganj, Sylhet and Netrokona, the Bangladesh Water Development Board's Flood Forecast and Warning Centre said.

The authorities recorded 650mm of rain in India's Meghalaya state on Wednesday which worsened the flood situation in Bangladesh, said Md Shamsudduha, a sub-divisional engineer at BWDB.

Heavy to very heavy rainfall was also predicted for the northern and northeast parts of Bangladesh and the adjoining Assam, Meghalaya and Himalayan foothills of India's West Bengal in the next 72 hours.

"The floods have brought a disaster for all of us. At least nine Upazilas and the district town in Sunamganj are flooded now. The administration is working to move the people to safety, but the situation has worsened a lot," said Shamsuddoha.

Local volunteers joined government officials to speed up the evacuation process but they could do little as roads were inundated.

Professor AKM Saiful Islam of BUET’s Institute of Water and Flood Management said the flooding in the region will cause suffering for more than a week as the level of water in the Meghna basin is rising.

“The trend of rain is upward this year, more active than pre-monsoon. Overall, extreme events are increasing amid adverse weather. Floods are intensifying. We need to be prepared for that,” he said.

The expert suggested increasing the number of shelters, strengthening protection to stop river erosion and keeping food, drinking water and relief materials ready. He also suggested steps for the rehabilitation of the affected people.