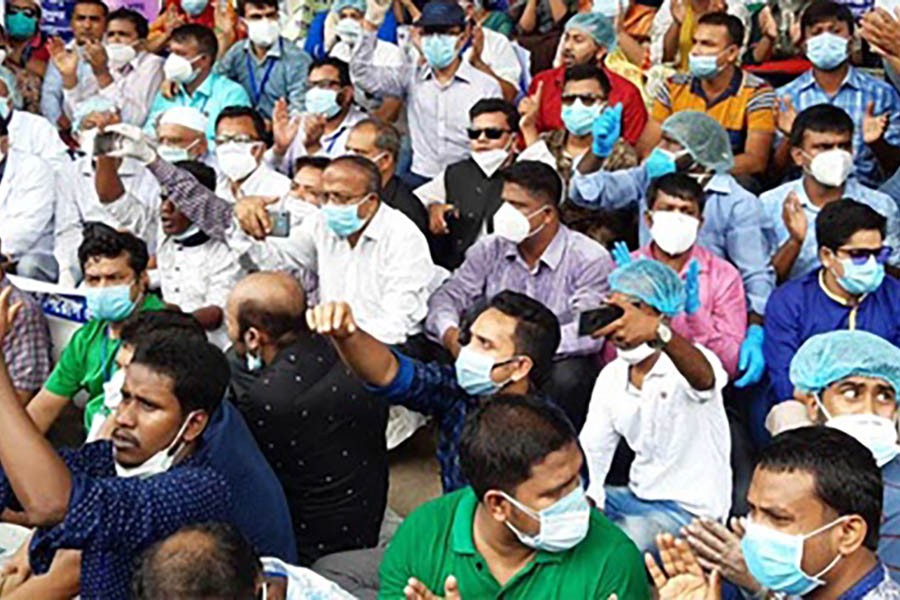 Medical technologists at government facilities have staged a sit-in demanding salary under grade 10 of the national pay scale at entry level.

Jobless medical technologists also joined the demonstration outside Sasthya Bhaban in Dhaka’s Mohakhali from 11:00am to 1:00pm on Sunday, reports bdnews24.com.

Their other demands include an executive order allowing those, who have become crossed the age limit set for recruitment, to apply for government jobs, creation of new posts and cancellation of a system that “lack s transparency” in recommending technologists for permanent jobs.

If the demands are not met within the next three days, medical technologists will enforce a strike from 11am to 1pm at all government hospitals and health facilities on Jul 9, said Bangladesh Medical Technologist Association President Md Almas Ali Khan.

The protesters also demanded a separate board for medical technology education, an end to appointment of medical technologists on a voluntary or temporary basis and on master roll, implementation of a “one umbrella concept”, and a halt on recruitment of those with technical education degrees in health jobs.

The speakers at the programme said the Health Services Division does not recognise medical technologists "properly".

Thousands of medical technologists have surpassed the age fixed for recruitment because the government had not taken steps for appointment in over a decade, the protesters alleged.

They also alleged indifference of the Directorate General of Health Services to safeguarding the interests of medical technologists.