Maitri Express back on track after pandemic pause of two years 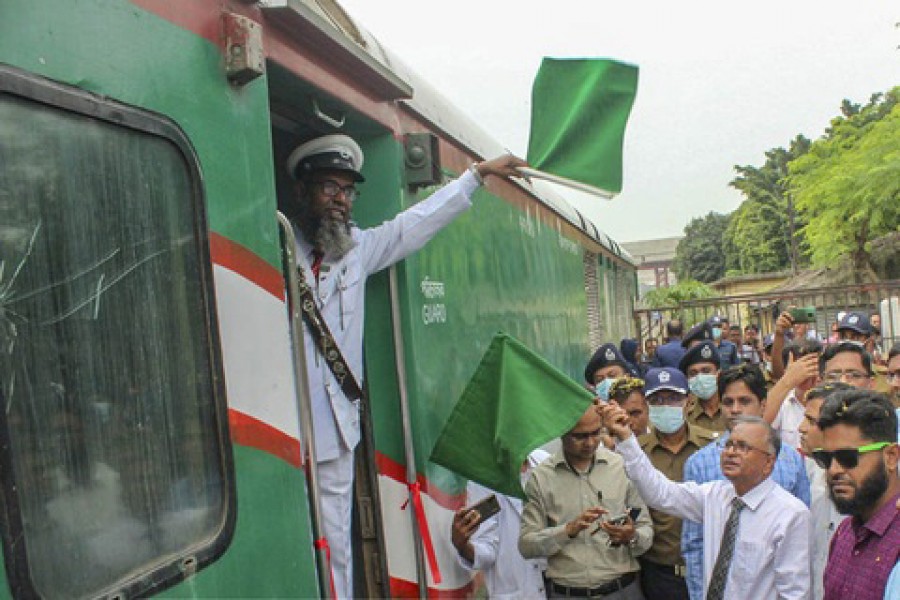 The Maitri Express between Dhaka and Kolkata has resumed its operations after a pause of 26 months due to the coronavirus pandemic, bdnews24.com reports.

The passenger train started its journey from Dhaka Cantonment Station at 8:15 am on Sunday. Dhirendra Nath Mazumder, director-general of the Bangladesh Railway, commemorated the departure by flying the national flag.

Train services between the two countries have been suspended since March 2020, said Mazumder. “We are happy to launch the train again after more than two years."

"Today, 165 passengers are traveling on the Maitri Express. We have 456 seats in the train. We took the initiative to launch the train just four days ago.”

Asked about the low passenger count, he said, "It's a matter of publicity. Many travellers are not aware of the relaunch date. I’m hoping the numbers will increase by the day. The seats will fill up within a week.”

The passengers were greeted with flowers.

The Maitri Express will reach Chuadanga's Darshana Station at 1:40 pm. After a 20-minute stop, the train will cross the border at 2 pm and leave for Kolkata.

According to Bangladesh Railway officials, the Maitri Express will reach Chitpur Station in Kolkata at 4 pm.

The Maitri Express will leave for Dhaka at 7:10 am (Indian time) from Chitpur Station on Monday. It will cross the border at 10:10 am (Bangladesh time) and reach Darshana Station. It will depart for Dhaka at 10:30 am.

The train will run between Dhaka and Kolkata six days a week, except Thursdays. Two trains, incoming and outgoing, will operate on Tuesdays, Wednesdays, Fridays and Saturdays.

"I am going to Kolkata with my wife for treatment. I have chosen this route because I like train journeys. You can travel safely by train,” said passenger Masudur Rahman.

Selina Hossain and Shafiqur Rahman are also travelling to Kolkata with their families. They said that they were waiting for the train to resume its services.

“Our family members prefer the comfort of train travel and that’s why we chose this route and applied for visas.”

The Maitri Express train was first launched on Apr 14, 2008.

Due to the current pandemic situation, passengers traveling to India will have to show negative reports of RT-PCR tests taken within 72 hours before their departure or complete vaccine certificates.