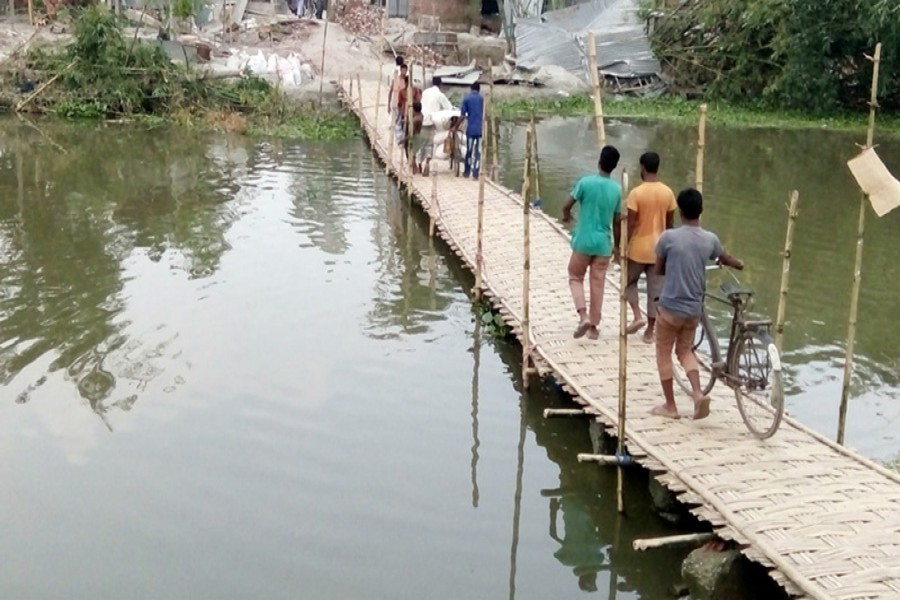 Local people built a bamboo bridge on the broken part of a road in Alemarbazar area under Gangachara upazila of Rangpur. — FE Photo

RANGPUR, Sept 12: The local people of Morneya union under Gangachara upazila in Rangpur district have set an example by constructing a bamboo-made bridge (Sako) with their own initiative over the damaged part of the pavements to cross roads at Alemarbazar area of the union.
According to local sources due to recent flood water caused by heavy rainfall and onrush of water from upstream roads in many areas of the upazila got damaged. As a result the local people are suffering much as many areas are still under water. Owing to massive damage of roads or pavements a big ditch across 100 feet area has emerged. It has become so difficult for locals to communicate with other parts of the upazila crossing the ditch as it has remained under water since last month. Many people are crossing the area by boat which is very risky. Especially children, patients and elderly people are the worst sufferers.
Farmers and traders of the areas are also suffering a lot as they are facing setback to carry their products and goods to different areas.
Under the circumstances the local people irrespective men, women, poor and solvent villagers together collected money, bamboo and other materials and thus contributed voluntarily and eventually erected around 100 feet long bamboo bridge collectively over the ditch and opened the bridge for all a week ago resolving communication problems in the area.
Local Union Parishad Chairman Mosaddek Ali Azad said locals are now happy as the new bridge has given them relief from their miseries. Now the villagers will be able to communicate with other parts of the upazila. They also can go nearby haat and bazar easily for purchasing and selling commodities, he added.
sayedmofidulbabu@gmail.com