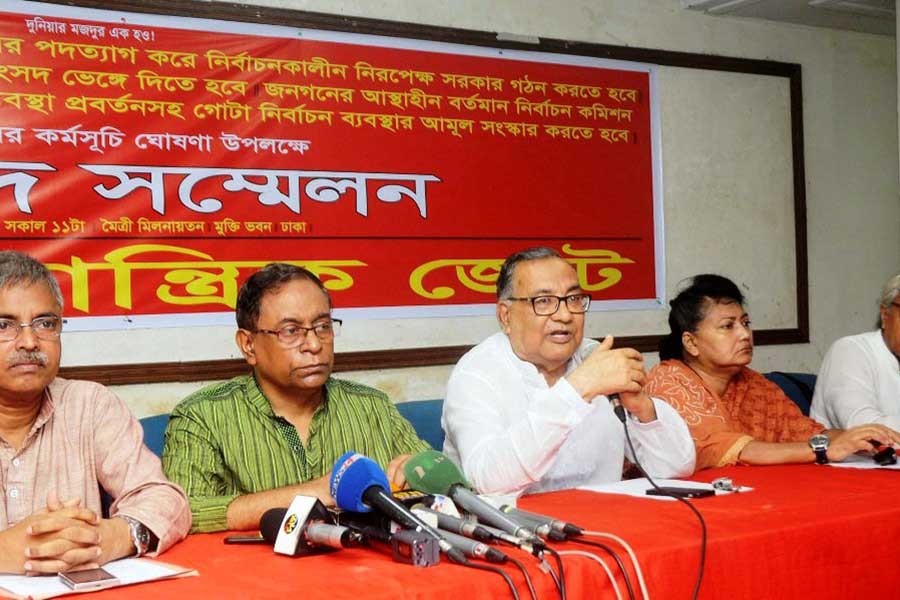 Left Democratic Alliance (LDA) on Sunday announced a two-day programme to press for holding the next polls under a non-party neutral administration.

As part of the programmes, the LDA will hold a 'mass-sit-in' programme across the country on October 23 and submit the memorandum to the President on October 29.

In the capital, the 'mass-sit-in' programme will be observed from 11am to 3pm in front of the Jatiya Press Club.

He urged the government to come up with a specific announcement by this month to quit power and take steps for forming a non-party election-time government through talks with political parties.

The LDA coordinator threatened that they will announce harsher programmes like blockade if the government does not quit power, dissolve parliament, reconstitute the Election Commission and form the election-time neutral government for holding an acceptable general election.

He said the country's people will no longer tolerate any unilateral election in the country.

"We would like to say the government won't be able to hold a 2014 like election this time as people are now united to restore their voting rights."

Earlier, several hundred leaders and activists of LDA, a platform of eight left-leaning parties, held a rally in front of the Jatiya Press Club protesting the government's misrule, plundering and repressive acts, and demanding holding the next polls in a credible and acceptable manner under an impartial election-time government.

After the rally, the LDA leaders and activists brought out a procession towards the Secretariat, but police intercepted them near the Jatiya Press Club.

LDA leaders and activists the activists engaged in a scuffle with police as they tried to break the police barricade.

Later, they staged a demonstration near the secretariat and announced their action programmes.