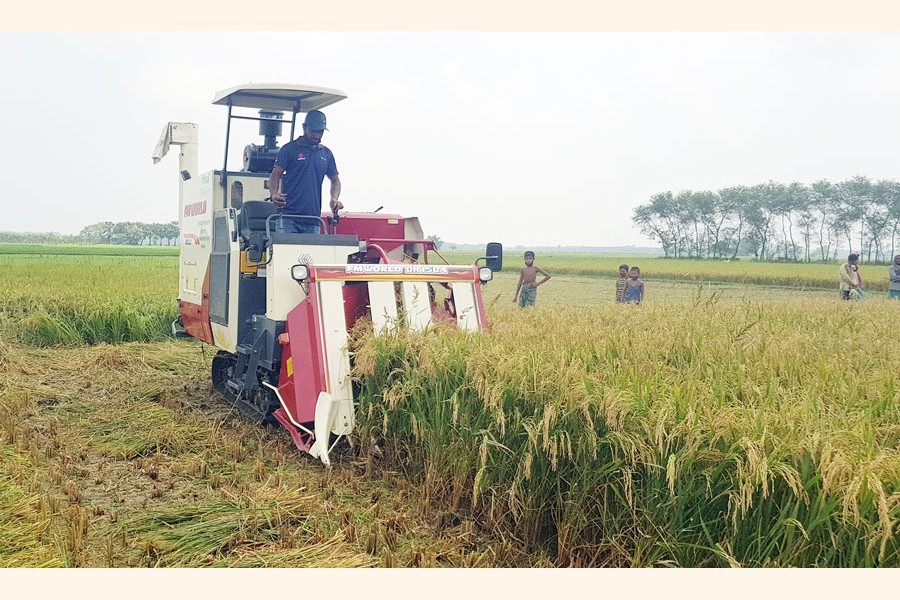 Boro farmers in the Barind tract area and Magura district are facing serious problems due to shortage of labourers and their high wages.

Our Bogura Correspondent says, acute labourer crisis has been hampering Boro paddy harvesting severely in the Barind tract area. Due to shortage of labourers, the wages of the available ones have gone high. Most farmers are having a tough time in harvesting paddy in this peak season.

Local farmers alleged that a day labourer charges Tk 4000-5000 to harvest paddy of one bigha of land.

Rahim Uddin, a farmer of Dupchanchia upazila, said, "Now it is high time to harvest paddy and presently there is a crisis of labourers in his area. This crisis persists every year. The farmers are to pay Tk 4000 to 5000 to harvest the paddy on a bgha of land".

Visiting some areas, this correspondent found that most of the Boro paddy in the region including Chalan Beel area is ripe. The harvesting and threshing of the paddy variety started in mid-Baishakh and it will continue till mid-Jaistha. But due to frequent rains and labourer crisis, many growers are seen worried. It is raining intermittently again due to the effect of cyclone 'Asani' and the low-lying croplands including vast Chalan Beel may go under water.

Shahidul Islam, another farmer of the same upazila, said, "After a few days of rain, almost every field in the region has lost its paddy. Workers are not available at extra cost".

Due to labourer crisis, many farmers are forced to cut paddy themselves.

According to Department of Agricultural Extension (DAE), about 0.66 million (6.6 lakh) hectares of land have been brought under Boro paddy cultivation this season in Rajshahi, Naogaon, Natore, Joypurhat, Bogura and Chapainawabganj districts.

Deputy Director of Bogura District Md Dulal Hossain said, "About 20 per cent of the paddy has been harvested".

Besides, due to natural calamities, the average yield will fall below 20 maunds per bigha, the farmers and the departments concerned fear.

Deputy Director of Rajshahi District Mozdar Hossain said, "There was a labourer crisis in Rajshahi during the harvesting season of Boro paddy. Modern technology is being used to harvest paddy".

Kashem Mandal, a farmer of village Dharla under Magura Sadar upazila, said, "This year, I brought my three bighas of land under Boro cultivaiton. Though now it is high time for harvesting I am yet to do so. I am failing to harvest my paddy as demand of a labourer per day is Tk 1200."

Kumud Mandal, another farmer of village Kukna under Magura Sadar upazila, said, "I am unable to employ labourer at existing wages -- Tk 1200 to 1300 per day. Finding no other alternatives, I along with my two sons harvested the paddy".

Dr Hayat Mahmud, deputy director of DAE, Magura, said, "Due to wages rise of labourers, many farmers are now harvesting paddy hiring harvester machine. It saves both money and time. However, paddy harvesting will be completed within this month. "