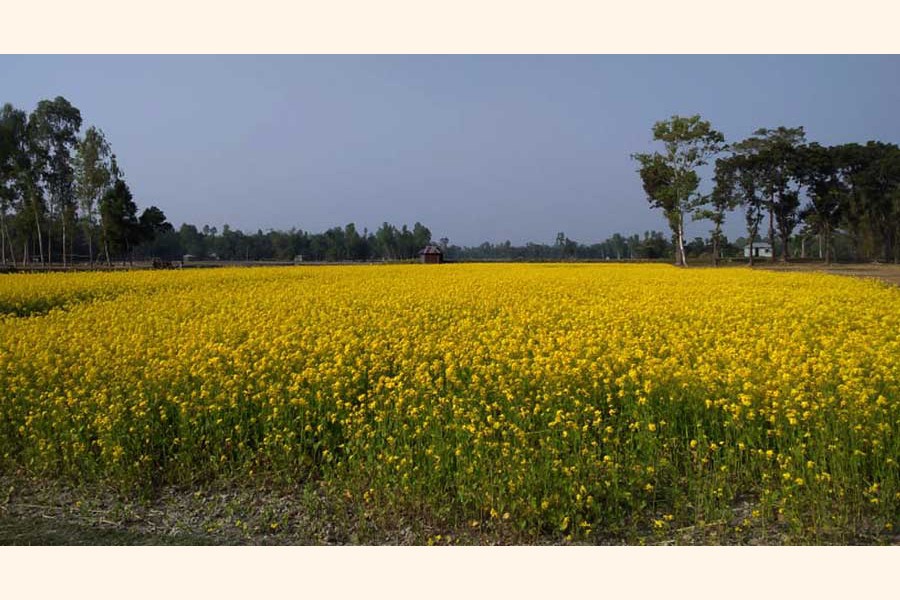 A mustard field in Dumuria upazila in Khulna — FE Photo

KHULNA, Jan 20: Mustard cultivation is popular among the growers in the district.

A good number of farmers said mustard production in the Rabi season is profitable as it requires low labour and production cost.

They said many farmers in Dumuria upazila are cultivating the oil seed without ploughing their lands this season.

The farmers sprinkled mustard seeds in the wet field just after harvesting T-Aman paddy. The croplands are now in full bloom everywhere.

Deputy Director of the Department of Agricultural Extension (DAE) Pankaj Kanti Mojumder said, ''Mustard is growing on 595 hectares of land under nine upazilas this year. It is around 140 hectares more than that of the last year. BINA-4 and 9, BARI Sarisha-14 and 15 and some local varieties are popular among the mustard cultivators."

Farmer Renuka Mallick of Shovna union in Dumuria upazila said, "Mustard plants are growing beautifully amid favourable weather this year. Rain in the beginning of the season helped grow the plants well."

She said she is growing the crop on two decimals of land.

Dumuria upazila agriculture officer Mosaddek Hossain said mustard farming is becoming popular as it is a short-duration crop. Growers can harvest it after 75 days of its cultivation. About 700 farmers in the upazila were provided fresh seeds and fertiliser so that they can grow the crop without any hassle.

"Our field-level officials are monitoring the crop fields across the upazila", he added.

Our Rangpur Correspondent writes: The peasants of Rangpur agriculture region have geared up mustard farming with the hope of earning good profit during the current season.

According to Department of Agriculture Extension (DAE), Rangpur sources the department has set a target to cultivate mustard on around 38,941 hectares of land in five districts under the region this season with a production target of 57,441 tonnes of produce. Last year the crop was cultivated on 23,489 hectares of land.

The districts are: Rangpur, Kurigram, Gaibandha, Nilphamari, Lalmonirhat. Mustard farming has increased significantly this year in the region, sources said.

The excellent growth of mustard in different areas of the region signals a bumper yield of the cash crop during the current Rabi season.

Farmers of the region have been showing their interest in the cultivation of the crop due to easy cultivation process and less production cost compared to other crops, sources said.

Expressing satisfaction a good number of mustard growers told The Financial Express that earlier they used to grow other crops on their land but were not able to earn expected profit.

But since they began cultivating mustard instead of other crops they have been getting good profit. Its cultivation process is also easier than most of the crops, they further said.

Helal Mia (50), a farmer of Tilokpara village at Mithapukur  upazila in Rangpur district said  that he cultivated the crop on 40 decimals of land  this season with the hope to achieve good profit. He is quite happy to witness the well grown mustard plants predicting a plenteous production. Cultivation of the crop requires only two to three times irrigation while about Tk 3,000 to Tk 4,000 is required for cultivating the crop on one bigha of land, he said.

DAE Rangpur official sources said the cultivation of mustard is increasing in the region as the farmers found its cultivation lucrative in comparison with many other crops. DAE is helping the growers by supplying quality seeds, fertilisers and other agri-inputs to them in order to boost its yield, sources added.

Meanwhile, Our Cumilla Correspondent adds: Mustard cultivation has expanded in Brahmanpara upazila in the district. Farmers are expecting a bumper yield of mustard this season.

According to sources in the upazila DAE office, around 155 hectares of land have been brought under the farming of mustard in the area this season with the production target of 180 tonnes to 185 tonnes.

Upazila Agriculture Officer Mahbubul Hassan said mustard cultivation in the upazila fell in the district in the last season. Farmers were encouraged to cultivate the oil crop by taking some measures.

He said seeds of Bari Mustard-14 and Bina Mustard-9 and fertiliser were provided among 150 farmers. Besides, some farmers are cultivating Tory-7 mustard on their own initiative.