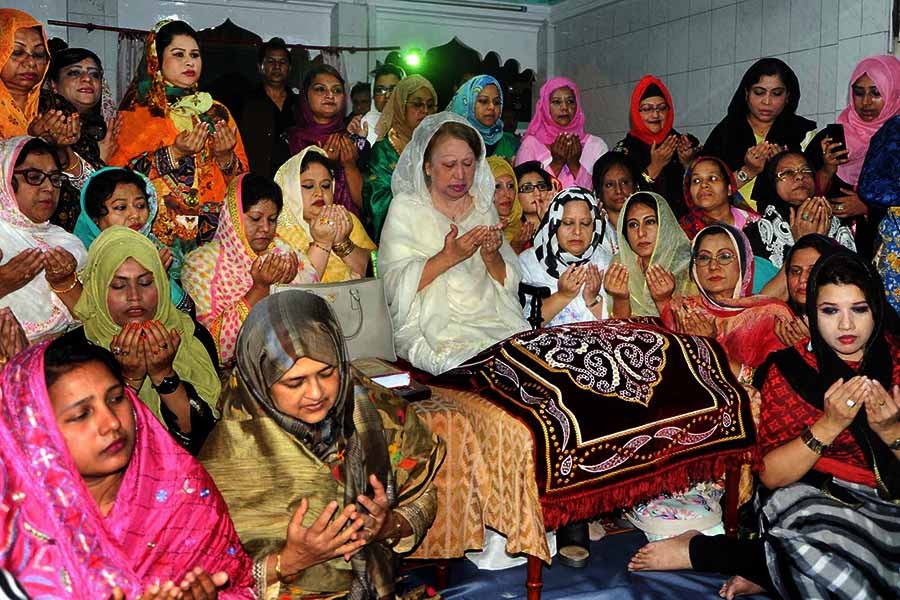 BNP Chairperson Khaleda Zia has started for Dhaka after packing up her Sylhet tour.

Earlier, she offered prayers at the shrines of Hazrat Shahjalal (R) and Hazrat Shah Paran (RA) in Sylhet on Monday evening.

The BNP chief went to the shrine of Hazrat Shahjalal (R) in the city around 6pm and performed Magrib prayers at a room reserved for women there.

She offered fateha and a munajat at the shrine.

Later, Khaleda went to the shrine of Hazrat Shah Paran at Khadim Nagar, 7km away from the city around 7:20pm.

The BNP chief offered fateha and also a munajat there, and then returned to Sylhet Circuit House.

Earlier, the BNP chief who started her journey for Sylhet from her Gulshan residence in the capital by road around 9:15am reached the Sylhet Circuit House around 4:30pm.

After taking lunch and rest for a while at the Circuit House, she went to the shrine of Hazrat Shahjalal (R).

But it took her nearly 50 minutes to reach the mazar, a 2-km journey, as hundreds of people stood on both sides of the road welcoming her.

Meanwhile, on her way to Sylhet, a group of people shouted slogans in favour of Awami League and its election symbol 'boat' and showed shoes and sandals while Khaleda's motorcade was crossing Narsingdi's Bhelanagr area around 11:20 am.

They also tried to attack a car of Jubo Dal central leader Mahbubul Hasan Pinku but police resisted them.

The law enforcers were also seen obstructing BNP leaders and activists from taking positions at many points of the highway to greet their chairperson.

Police also detained many BNP leaders and activist, including eight in Narayanganj, 12 ones at Kararchar in Narsingdi, who tried to take to the streets to greet and welcome their party chief.

Khaleda is scheduled to return to Dhaka tonight (Monday night).

According to UNB, Khaleda last visited Sylhet on October 4, 2013 and addressed a rally of BNP-led 20-party alliance there.

The Special Court-5 in Dhaka on Thursday fixed February 8 to deliver its verdict in the Zia Orphanage Trust graft case filed against Khaleda and five others.