‘July 16 not only imprisonment day, democracy confinement day too’ 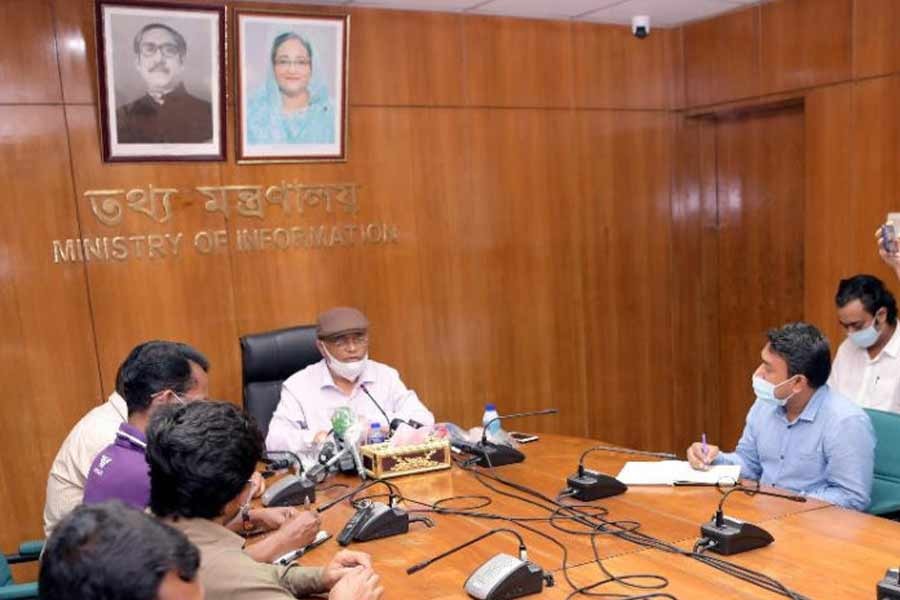 Information Minister Dr Hasan Mahmud on Thursday said the July 16 is not only the imprisonment day of Awami League President and Prime Minister Sheikh Hasina, it is also the democracy confinement day.

The information minister said daughter of democracy AL president Sheikh Hasina remained steadfast in crisis, and was arrested as she protested different irregularities of the then caretaker government, reports BSS.

Hasan said, “Our leader Sheikh Hasina protested the then caretaker government’s irregularities like their arrest of a minor daughter for her father’s crime and arrest of a sick wife for her husband’s fault. Actually, they arrested our leader (Sheikh Hasina) to supress her voice against unfairness and injustice and to confine the democracy.”

But, he said, the persons who were in power at that time felt that imprisoned Sheikh Hasina is stronger than freed Sheikh Hasina. Conceding to the people’s spontaneous and repeated demands and pressure from different quarters, the then caretaker government was compelled to release the AL president from jail.

The information minister said the AL-led grand alliance registered a landslide victory in the national election of December 29 in 2008, and Awami League President Sheikh Hasina became the Prime Minister.

He said Prime Minister Sheikh Hasina has been leading Bangladesh successfully in the last 11 and a half years. “The country graduated to a middle-income country from the lower-income one under her (Sheikh Hasina) leadership. The food-deficit Bangladesh has become a food-surplus country and the poverty has declined to 21 percent from 41 percent. Bangladesh becomes one of the highest GDP achieving countries in the world.” he added.

But, he said, it is regretful that the conspirators of 1/11 are still now hatching conspiracies, when the country is moving ahead indomitably and when the World Bank, the United Nations and global leaders are praising the leadership of Prime Minister Sheikh Hasina,

They are active at home and abroad and out to create anarchy, he said, adding that the government is keeping eyes on their activities. “I’m urging our party leaders and activists and who believe in democracy to remain alert against their activities,” said Hasan, also AL joint general secretary.

He said Prime Minister Sheikh Hasina has extended her hands to provide support and health protection during Coronavirus pandemic. She has declared government’s support of 3.6 percent of GDP to protect the economy from the crisis, he added.

“I would like to congratulate our dynamic leader Prime Minister Sheikh Hasina on this day,” he said, adding that now the World Economic Forum, World Health Organization and top global media outlets are praising the leadership of Sheikh Hasina.

He said Sheikh Hasina is not only daughter of democracy and the symbol of freeing democracy, she is now the icon of development and progress.

Hasan said Bangladesh had turned into a state of terrorism during the regime of BNP-Jamaat for their unlimited corruption, misrule and rising of militancy from 2001 to 2006. They created ‘Bangla Bhai’ and Shayok Abdur Rahman, he added.

When BNP was in power, they ran a ‘parallel’ government creating the “Hawa Bhaban” and its main task was to extort toll from businessmen, he said, adding that they (BNP) gave extortion an institutional shape and a chaotic situation was created in the country through creating ‘Khoyab Bhaban’ for entertainment.

“But, surprisingly, we saw that our leader Sheikh Hasina was arrested and they didn’t take actions against those persons who turned the country into a hell through corruption and misrule,” the information minister said.

Replying to another query about bringing back Tarique Zia, Hasan said he is a life-time convict in one case and awarded 10 years’ jail in another case. Discussions are going on to bring back Tarique Zia, he said, adding that there is no prisoner exchange agreement between the two countries.

“I think that he should surrender to the court if he is a politician. A real politician doesn’t afraid of law and the court,” Hasan added.