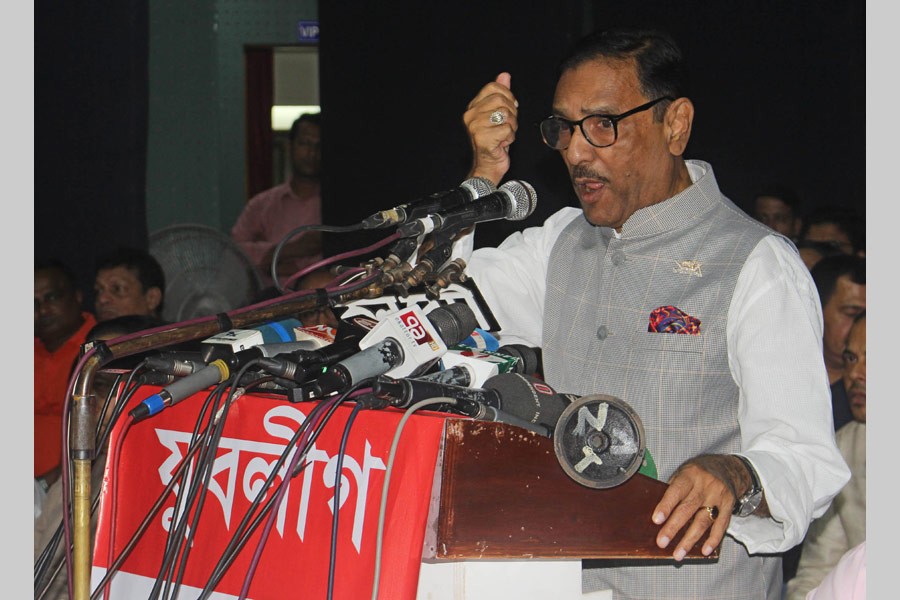 The Awami League is unfazed by the leadership tussle that is consuming the Jatiya Party after the death of HM Ershad, the ruling party's General Secretary Obaidul Quader has said, reports bdnews24.com.

“They will determine their own chairman and the leader of the opposition. The Awami League has no headache over it. We don't even need it,” he told reporters at an event in Dhaka on Friday.

The Awami League and the Jatiya Party coalesced under the banner of the ruling grand alliance to contest the last several parliamentary elections.

After the 10th parliament elections, Ershad served as the prime minister's special envoy while his wife Raushon Ershad was installed as the leader of the opposition.

Several Jatiya Party lawmakers were also inducted into the cabinet. Consequently, the Jatiya Party was denigrated as a “domesticated opposition” in many quarters over its ostensible failure to effectively challenge the government.

Ershad, the former military strongman, died on July 14 while undergoing treatment at a hospital, and his brother GM Quader was named as the chairman of the Jatiya Party. It is said that this was Ershad's will.

But Ershad's wife Raushon vehemently objected to the decision, complaining that the party presidium members had not been consulted before Quader's appointment.

Amid the dispute, a letter was sent to Speaker Shirin Sharmin Chaudhury to seeking  Quader's appointment as leader of the opposition in parliament.

In response, Raushon sent a letter to the speaker on Wednesday, saying that no decision about the issue had been made in the party forum.

Then a faction of the Jatiya Party loyal to Raushon declared her as the party chairman on Wednesday, bringing the party to the brink of split. And many senior leaders of the party looked to the government to overcome the crisis, many media reported.

Asked about the BNP leaders' remarks that the government will select the leader of the opposition in the parliament, the Awami League general secretary said, "This is a lie."

“The leader of the opposition will be selected by the speaker in line with the rules. Our party has nothing to do with it. We don’t want to interfere in internal matters. There is no question of any kind of intervention. "