Ivy, Shamim blame each other for clashes over hawkers on pavements 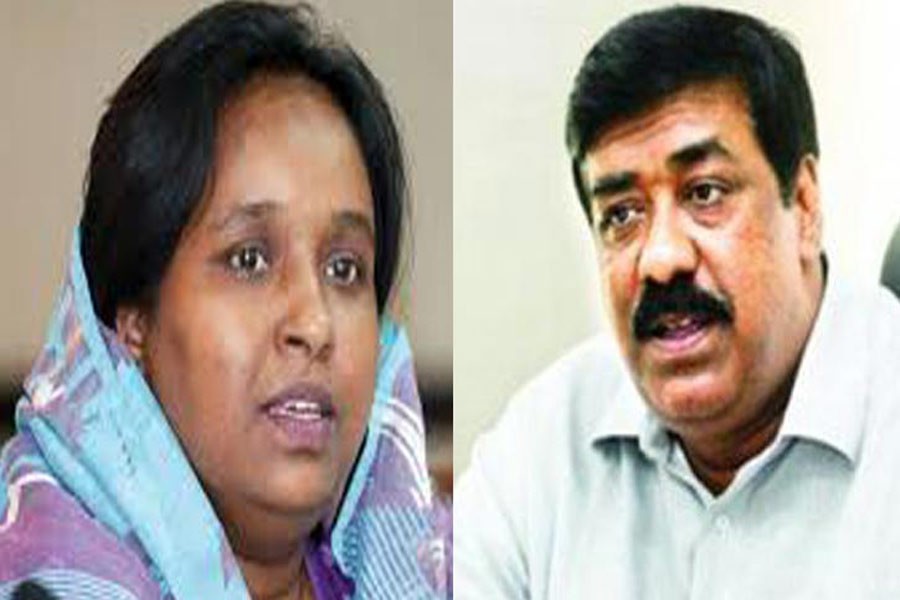 Top Narayanganj Awami League leaders - Mayor Selina Hayat Ivy and MP AKM Shamim Osman - have blamed each other over Tuesday’s clashes between their supporters over the eviction of hawkers from the pavements.

Ivy said that Shamim wanted to kill her and sent one of his henchmen with gun to carry out the mission while the MP said his man was not a goon and acted only in self-defence.

Ivy, a vice-president of Narayanganj district Awami League, briefed the media at her office. Shamim, a leader of the party’s Narayanganj City unit, organised a press briefing at Rifles Club on Wednesday.

Ivy criticised the law enforcers for their ‘silence’ during the attack on her and her supporters, demanding resignation of the superintendent of police and the deputy commissioner.

Shamim, a member of the influential Osman family, claimed the clashes were not a result of his longstanding rivalry with Ivy.

Selina Hayat Ivy speaks to the media about the clashes between her supporters and those of AKM Shamim Osman, according to bdnews24.

Selina Hayat Ivy speaks to the media about the clashes between her supporters and those of AKM Shamim Osman.

“Many are trying to label the clashes as a result of Shamim-Ivy dispute. I want to make it clear that I have no personal issues with Ivy. The hawkers clashed with Ivy’s people,” he said.

“Many are trying to label the clashes as a result of Shamim-Ivy dispute. I want to make it clear that I have no personal issues with Ivy. The hawkers clashed with Ivy’s people,” he said.

“It will be revealed on whose orders Niazul came to kill me if the police arrested and quizzed him,” Ivy said, recalling how Niazul wielded gun a few yards from her.

Additional Superintendent of Police Mostafizur Rahman said they were investigating Niazul for allegedly carrying gun during the clashes.

The district administration has also formed a three-member committee to investigate the clashes.

Ivy also said she wanted to settle the issue on the eviction of hawkers from pavements through talks with Shamim’s brother Salim Osman MP and she was exchanging letters containing proposals with Salim.

“Then, why did an MP from another seat start doing politics over the hawker issue?” she asked.

“Why should Sufian carry a pistol in his waist?” he asked and showed a photo backing his claim.

He, however, did not hand the photo to the journalists at the press conference.

Later on Wednesday, the district administration announced after a meeting that the hawkers will be allowed on the pavements after 5pm in the streets other than the main one.

Ivy and Shamim inherit the dispute between the two families, which dates back decades.

A clash broke out in Narayanganj on Tuesday between supporters of Mayor Selina Hayat Ivy and lawmaker AKM Shamim Osman in the city's Chashara. The dispute reached its peak when both of them ran for city mayor in 2011.
Shamim announced his support for Ivy on orders from party chief Prime Minister Sheikh Hasina during the last polls to the city corporation in 2016.

The duo, however, have attacked each other on several occasions.

The latest twist in the dispute began when the city corporation evicted the hawkers from the pavements.

Their supporters clashed after Ivy went to Chashara following Shamim’s announcement to put the evicted hawkers back on the pavements on Tuesday.