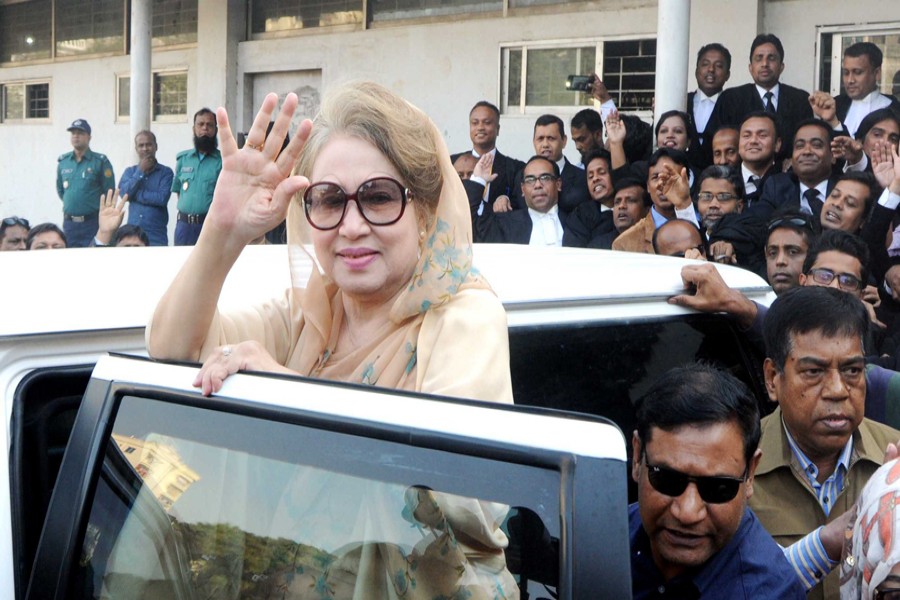 BNP Chairperson Khaleda Zia waves to party supporters after appearing before a special judge's court at Bakshibazar in the city on Tuesday in the Zia Orphanage Trust and Zia Charitable Trust graft cases. — Focus Bangla

Pleading innocent in two graft cases, BNP Chairperson Khaleda Zia on Tuesday told a court that she had never misused the power as the Prime Minister during her tenure, reports UNB.

"The false and fabricated cases were filed against me intentionally to harass me politically," she said while giving her self-defence statement in the Zia Orphanage Trust graft case before the makeshift court of Special Judge-5 at Bakshibazar.

After Khaleda's deposition, the court fixed December 19, 20 and 21 for the next hearings in the Zia Orphanage Trust and Zia Charitable Trust graft cases.

Earlier, Dhaka Special Court-5 Judge Md Akhtaruzzaman granted bail to Khaleda Zia in the cases responding to the bail petitions she filed after her surrender.

Earlier, on November 30, the court issued an arrest warrant for Khaleda Zia in the two graft cases after cancelling her ad-interim bail as she failed to appear before it on the day.

On October 19, the court granted bail to her upon a Tk 1 lakh bond each in the two graft cases.

On August 8, 2011, the commission filed the Zia Charitable Trust graft case with Tejgaon thana accusing four people, including Khaleda Zia, of abuse of power in raising funds for the trust from unknown sources.