How Bangladeshis coping with half a million new Rohingya refugees 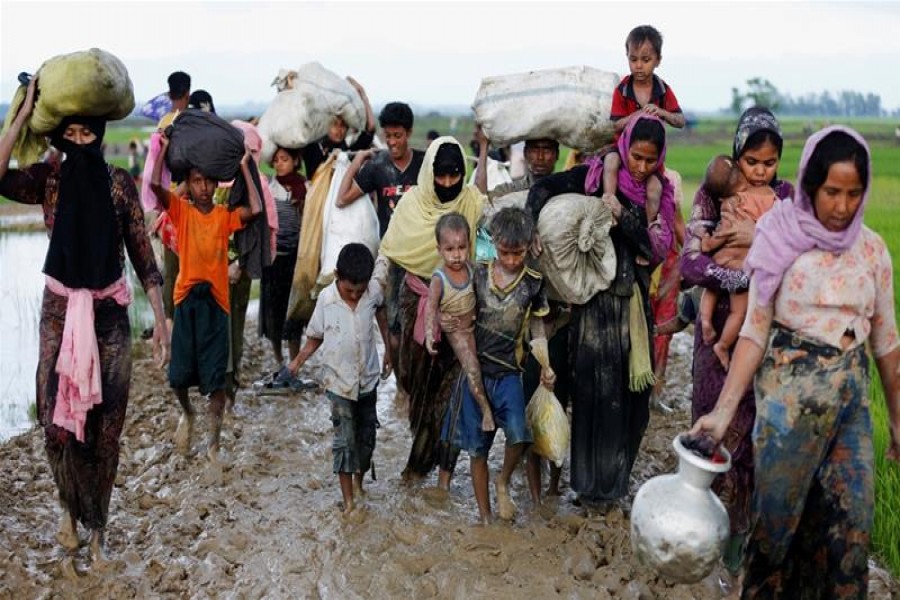 The sudden arrival of half a million Rohingya Muslims has upended life in this humble village, which is now overshadowed by one of the largest concentrations of refugees in the world.

The village’s rundown school and a smattering of rice paddies sit across the road from thousands of acres of bamboo huts covered by black tarp, a safe harbour for the refugees fleeing ethnic violence in Burma. That land was once a forest where villagers picked wild fruit.

Last Saturday, the midday tea-sipping crowd hung out on the benches in front of Munwara Begum’s provisions store here. In their discussion were echoes of a conversation happening around the world about the costs of compassion toward refugees. It was one filled with conflicting emotions.

“The price of rice has doubled since they came. The price of rickshaws has doubled. Vegetables, soap, you name it, and the price has gone up,” said Begum, counting her very real grievances on her fingers. Basic economics is at work here: When demand rises sharply and supply lags in catching up, prices rise.

“And the Rohingya are rich!” she said. “They have nice phones, solar panels. The ones who’ve been here since ’91 are in better shape than us!”

Joshimuddin, an elementary school teacher who like many here goes by one name, chimed in.

“Crime, too,” he said. “If a Rohingya beats someone or even murders them, they can just hide in the refugee camp. Then what are we supposed to do? They outnumber us.”

“It’s not like I don’t have sympathy — they had their own lives and now they have to stand in line for an hour just to use the toilet,” he continued. “But . . .”

Begum completed his thought with an echo of the Burmese state line she said she had heard: “Their boys attacked the military first. What did they expect to happen?”

Eklash Mian, a sharecropper, was visibly uncomfortable. He put his arm around his young son, drew him close and said, “They are poor. They are in trouble. Let them come. We’ll get by.”

The recent arrivals are most certainly poor and in trouble. Many arrived with nothing but the clothes on their backs. Others who had time to bring livestock or family heirlooms sold them for a pittance to the boatmen who ferried them to safety across an estuary that separates their burning villages in Burma from Bangladesh. As aid organisations struggle to cope with the sheer scale of need, thousands of Rohingya line the main road here, begging for alms.

Then again, Bangladesh is not exactly a beacon of prosperity. Nor is it a land of wide open spaces.

Bangladesh has far and away the highest population density of any sizable nation — around 3,000 people per square mile pack the alluvial plain that spans most of the country. The average Bangladeshi earns less than $1,500 a year. National highways are often pothole-strewn two-lane roads.

The overcrowding, the poverty and the underdevelopment are amplified in the country’s far southeast, where the half-million new arrivals have joined hundreds of thousands who fled earlier waves of violence. The latest exodus out of Burma began Aug. 25, when a band of Rohingya militants attacked police posts in Rakhine state, prompting a violent military crackdown in Rohingya villages.

Returning to Burma, also known as Myanmar, anytime soon is simply not on the cards for the Rohingya. Despite living in Burma for generations, they are considered Bangladeshi interlopers, not citizens, and the question of whether Burma will ever grant return to those who have no paperwork is viewed with great doubt here.

Although locals may be reluctant with their sympathy, bigger players in Bangladesh are eyeing political opportunities in this time of crisis.

Speaking to Al Jazeera last week, Bangladeshi Prime Minister Sheikh Hasina brushed aside doubts that her impoverished country could handle the influx and cast the well-being of the Rohingya as a national cause.

Across Bangladesh, streets and highways are lined with posters depicting Hasina wiping a tear off the cheek of a refugee child. They boldly declare: “Sheikh Hasina is the mother of humanity,” and “Where is humanity, there is Sheikh Hasina.” The opposition parties have their own versions. A hotly contested national election is just one year away.

Where politicians hope some will see compassion, others are seeing a ploy to curry support from Bangladesh’s religious right, which has come out strongly in favor of welcoming the refugees. Rohingya Muslims largely adhere to a conservative strain of Islam and speak a language similar to the dialect of Bengali prevalent in the country’s southeast. Bangladesh is 90 per cent Muslim.

“Bangladesh offered land to shelter Rohingya. What if these people were Hindus, Buddhists, Christians, Jews but not Muslims? Shelter not for humanity but for votes!” wrote Taslima Nasreen, one of Hasina’s fiercest critics who has lived in exile since 1994, when she was accused of defaming Islam.

The Islamist groups that hounded secularists such as Nasreen out of the country are the same ones spearheading the local relief effort for Rohingya refugees. The camps are full of volunteer groups from religious schools and organizations, handing out food, clothes and cash.

One in particular, Hefazat-e-Islam, has staged increasingly large rallies in Bangladesh’s two biggest cities, Dhaka and Chittagong. Tens of thousands have shown up. On Monday, Hefazat leader Junayed Babunagari issued a public statement saying the Rohingya were facing “genocide” and that if diplomacy fails to return them to their homes in Burma, Bangladesh should consider a military intervention.

Curiously, no religious or governmental organization is suggesting a path to citizenship for the Rohingya, who are expected to be here indefinitely. And government-imposed restrictions confine them to the camps near Gundum. Police checkpoints have turned back thousands seeking to move farther afield.

“The prophet Muhammad, peace be upon him, said that Muslims must help other Muslims,” said Maulana Jameel Hossein, a teacher at a madrassa who was tossing used clothing at refugees who had gathered around his organization’s truck. “The Rohingya are being attacked for no other crime than being Muslim. Until they can go back home, they will be our guests.”

Perhaps that was easy for Hossein to say. He lives in Brahmanbaria, 250 miles away from the camps that continue to grow by the day.