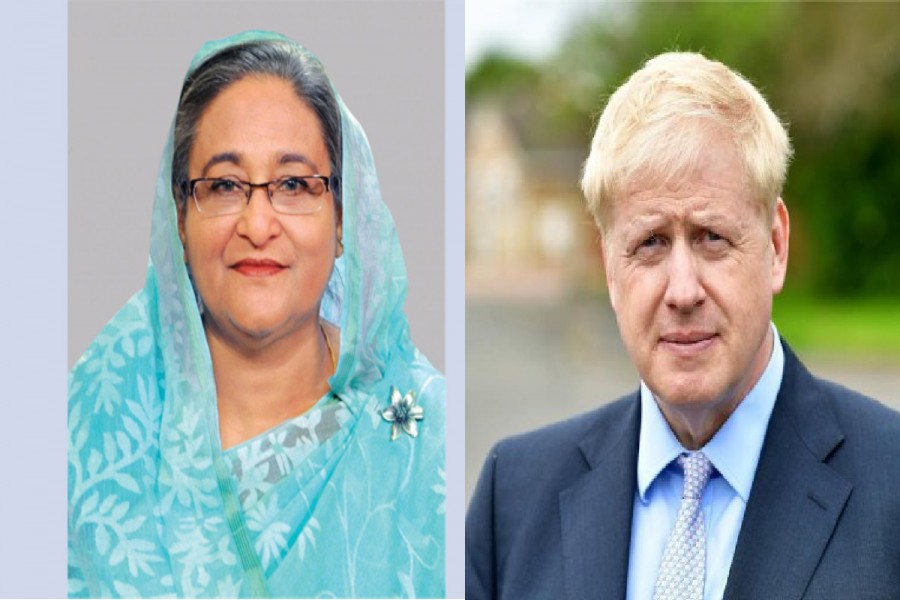 Prime Minister Sheikh Hasina congratulated British Prime Minister Boris Johnson on the impressive victory of his Conservative Party in the national election of the United Kingdom.

Sheikh Hasina observed the victory as reaffirmation of the tremendous trust and confidence the people of the United Kingdom reposed on the Party’s leadership, according to a message received from PM's Assistant Press Secretary ABM Sarwer-E-Alom Sarker.

She recalled that the two countries are enjoying special relations founded on the strong and common values of democracy and tolerance, and the common positions on issues such as the challenges of climate change, countering terrorism and extremism and the shared aspirations for greater prosperity.

The Prime Minister reiterated that the UK has been closely linked with Bangladesh’s history and recalled the support by the government and people of the UK during Bangladesh’s War of Independence under the leadership of the Father of the Nation Bangabandhu Sheikh Mujibur Rahman in 1971, and the steadfast commitment of the UK in ensuring freedom of Bangabandhu from prison in Pakistan without an harm to him was key component in forging the friendly ties between the two countries.

She expressed gratitude to the friendship and warmth with which then Conservative Prime Minister Sir Edward Heath received Father of the Nation Bangabandhu Sheikh Mujibur Rahman in London on January 8, 1972 on his arrival from Pakistani prison, UNB reported.

She recalled Boris Johnson’s visit to Bangladesh and the Rohingya camps in February 2018 and expected that with support of the international community and UK’s global leadership, it will be possible to ensure Myanmar’s accountability for the atrocities committed against the Rohingyas, and that the Rohingyas will be able to go back to their homeland with rights, dignity, safety, and in a sustainable manner.

"On this issue, Bangladesh will look forward to personal intervention of the British Prime Minister to ensuring justice for the Rohingyas," the message reads.

Prime Minister Sheikh Hasina expressed satisfaction over the multifaceted relationship between Bangladesh and the UK based on cooperation and collaboration in the areas of trade, investment, achieving sustainable development goals.

She believes that with the renewed mandate of statesmanship the Bangladesh-UK relationship can be taken to a newer height for the mutual benefits of their people, including the vibrant Bangladesh-British diaspora in the UK.

She looks forward to continuing to work with the British government for further strengthening partnerships in the areas of common interests and for the interest of the humanity.

The Prime Minister invited her British counterpart Boris Johnson at the centenary celebrations of Father of the Nation Bangabandhu Sheikh Mujibur Rahman in 2020 in Bangladesh.