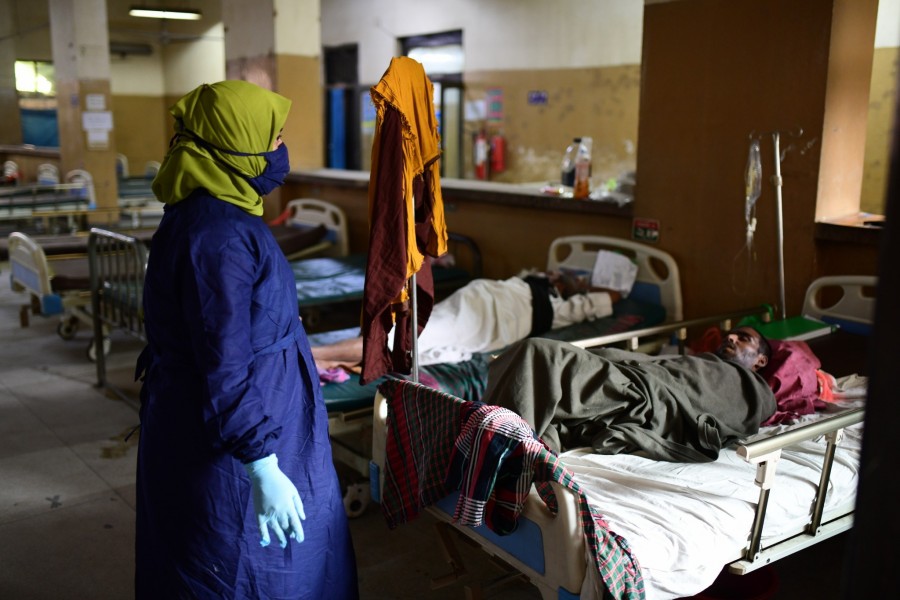 The country's health expenditure has been one of the lowest in the region for years. A sizeable part of the allocation made annually in the national budget gets lost in the vast cobweb of corruption and the remainder has never been enough to narrow the ever-widening inequality in the health sector.

The health authorities have been struggling to deliver primary health-related services in districts and upazilas for lack of required health professionals and equipment.

However, many incidents of irregularities in recruitment or posting health professionals and procurement of medical equipment have hit the news headlines in the recent years.

The audit department tallied objections for a period of four years beginning from the fiscal year 2010-11 to 2013-14, which show that the number of cases with the health department has been on the rise year-on-year basis.

A total of 54 serious financial irregularities were identified in the health sector by the audit department during the four fiscal years involving an estimated Tk 1.3 billion.

Sources said there were a number of financial irregularities during the two consecutive fiscal years--2014-15 and 2015-16.

The audit office of the government did not share the details with the Financial Express on the grounds that the audit reports are yet to be placed before Parliament.

Noticing a sharp rise in the number of audit objections, the Comptroller of Auditor General of Bangladesh office has recently dedicated a directorate to grapple with the growing number of objections that involve some serious financial crimes.

The health expense in Bangladesh in terms of share of gross domestic product (GDP) is equivalent to roughly over 2.0 per cent and per capita health expenditure amounts to a paltry US$ 36, according to the World Health Organisation (WHO).

The country's health expenditure as percentage of GDP is one of the lowest in the region. Then again, a major chunk of it is spent in Dhaka and its suburbs.

As a result, the best healthcare facilities and senior professionals can only be found in Dhaka although most people live in rural areas where high levels of disease and malnutrition exist because of the disparity in allocations.

Though the government has upped its budget allocation to some extent in fiscal year 2020-2021 considering the Covid-19 pandemic, healthcare professionals term the hike "too little" in addressing the level of persistent disparity in the country.

This will unleash many challenges in the post-pandemic era.

Officials at the ministry of health and its directorate said the government has built many medical colleges and hospitals over the years and many more are in the process of building.

Once the projects are finished, the inequality will go down to a large extent, they expressed the hope.

But health scholars are not convinced, noting the lack of required doctors, nurses, technicians and equipment put authorities of the newly-built facilities in a tight spot to deal with the growing number of patients.

This has also some other side-effects. A section of middle-class patients residing outside Dhaka move to the capital city seeking 'average' care, while relatively affluent people go to India for better treatment. The rich opt for world-class treatment in Singapore, Thailand and of late Malaysia.

According to the tourism statistics, the industry is estimated to be as large as US$ 9.0 billion by 2020 and Bangladesh is expected to be a major contributor to the foreign earnings.

The health scholars said most of the development projects are also implemented in Dhaka division. Those may be for expanding existing facilities and some new organisations are being built as complementary to the existing facilities.

A project for modernisation and expansion of Dhaka Medical College and Hospital and NITOR and so on are typical examples.

The development budget documents show the department of health gets the largest chunk of the fund or nearly 60 per cent of the allocation meant for the entire sector.

Some 35 development projects under the directorate are now being implemented, including some new medical colleges and hospitals.

And the majority of the development schemes are concentrated on Dhaka division, which reflects deepening inequality in state-backed healthcare.

Many blamed poor resources for this as the government allocated Tk 64 million in the last fiscal year (FY 2020) for the directorate of nursing.

Similarly, the development budget for the drug administration remained also poor amounting to Tk 212 million, which is considered too little to effectively supervise the booming medicines industry.

According to the WHO statistics, Bangladesh has some 5.81 doctors in treating each 10,000 people, which is the lowest in the region. The ratio is 7.49 even in Nepal.

In terms of per-capita health expenditure and a share of GDP, the densely-populated nation of around 170 million is also ranked at the bottom in South Asia.

The country's health expenditure as a share of GDP was also measured by the WHO to 2.3 per cent, which is the lowest in the region as well.

Health Economics Unit, a government regulatory agency under the ministry of health and family welfare, is responsible for providing policy advice and recommendation on the health industry to the government.

It said they provide policy advice to the government on the basis of research findings.

They said they work on the inequality just not like scholars say it.

He, however, said both the government and public sector have built many medical colleges, but most lack required facilities.

"We need doctors, equipment and others to ensure better health facilities," he said.

He said resource allocation is need-based, which is yet to take place in Bangladesh.

Former principal of Rangpur Medical College and Hospital Dr Zakir Hossain said physicians do not want to get posted in the peripheral areas because of the least opportunities.

Alongside developing physical infrastructure, the required facilities for the healthcare professionals also need to be ensured, he said.

"For this, we require investment. The budget allocation needs to be further enhanced and disbursement of the fund should be based on population ratio in different regions," he added.

DGHS director (admin) Dr Sheikh Md. Hasan Imam said the disparity in getting medicare services has long been hurting the sector, but the Covid-19 situation exposed it glaringly.

He said the pandemic showed how unequal the facilities are across the country and the importance of proper medicare in the peripheries.

They need to well-equip the district sadar hospitals so that people, except for critical cases, in the periphery do not go to divisions or Dhaka.

"The ballooning load on divisional headquarters, namely Dhaka and Chattogram, needs to be reduced as quickly as possible. It is nothing impossible because we have the infrastructure. What we require is to remove the human resource deficiency," he said.

The consecutive five year plans of the country did specifically not mention about health inequality and mapping for required budget allocation centring over the reduction of the existing disparity.

Professor Dr Shamsul Alam, senior secretary at the GED, told the FE that they touched upon all forms of inequalities like in health, education, regional and income in the eighth five-year plan, for which work has started from 2020.

At the same time, they also identified remedies to lessen the widening disparity and achieve the SDGs (sustainable development goals) by 2030, he added.

Secretary of the finance division Abdur Rouf Talukder said they have focused more on enhancing the effective spending capacity of the sector that is now under immense pressure because of COVID-19 pandemic.

"If we proposed more allocations in the budget for the sector, can it absorb it?" he questioned.

He also mentioned that they have been taking various measures for spending capacity building of its officials in a transparent way.

Despite repeated efforts over mobile phone and WhatsApp, health minister Zahid Maleque responded with a brief text that appeared to be defensive.

He noted the health sector has done "quite a lot" in tackling the coronavirus pandemic with little resources compared to other countries.