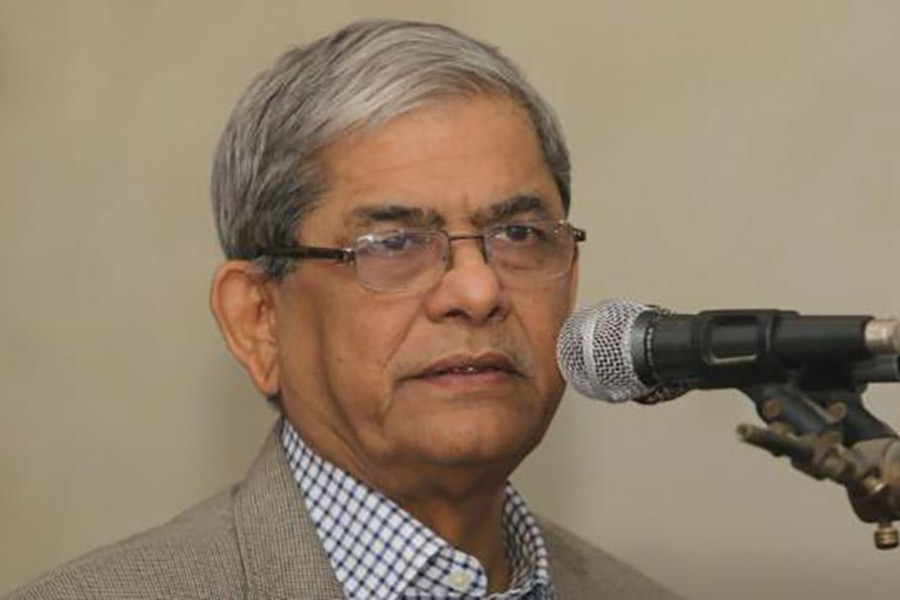 BNP Secretary General Mirza Fakhrul Islam Alamgir on Friday voiced concern over the violence in Union Parishad (UP) polls and said the government “deliberately destroyed the electoral system to hang onto power”.

Speaking at a discussion meeting, he also said it is unimaginable the way ruling party men were seen holding sharp weapons, pistols and sticks in the UP polls. “But the ministers are saying it’s usual bickering. We would like to say the government is behind all these things.”

The BNP leader said the government has very consciously and deliberately destroyed democracy and politics in the country. “Their main motive is not allowing anyone to do politics here and thus perpetuate their power.”

Fakhrul also slammed Chief Election Commissioner (CEC) KM Nurul Huda for describing the UP polls as free and fair despite the widespread violence. “This gentleman (CEC) has no sense of shame.”

A faction of Jatiya Ganotantrik Party (Jagpa) arranged the programme at the Jatiya Press Club marking “civil-military uprising” on November 7, 1975.

Fakhrul said, US President Joe Biden has invited 100 countries to a virtual Summit for Democracy. “But it’s a matter of shame that Bangladesh’s name is not there. It means the country is now being identified as an undemocratic one. Nothing can be more unfortunate than that.”

He said the current government is so vindictive that it did not allow ailing Khaleda Zia to go abroad for advanced treatment.

The BNP leader said the nation is going through a tough time due to the ‘misrule’ of the Awami League government. “No one is now happy. We all are now suffering from a sense of discomfort.”

He urged people of all walks of life and all political parties to get united and put up a strong resistance against the government to overcome the current situation.

Fakhrul expressed displeasure over the verdict in the Raintree Hotel rape case saying that the “entire woman folk has been insulted with it”.

“The verdict in a case filed in connection with raping two students at Raintree Hotel was delivered yesterday (Thursday). As we see in the newspaper, the accused gave confessional statements in court. But the verdict was given acquitting them,” he said.

“What’s the reason? The reason is those who were arrested and accused are powerful. They’ve so much money, Jewelry and MP…. I strongly protest it. I’m disappointed and I’m aggrieved. We can’t accept such a verdict,” the BNP leader said.

On Thursday, the Women and Children Repression Prevention Tribunal-7 acquitted five youths, including Apan Jewellers owner’s son Shafat Ahmed, of the charge of raping two university students at Raintree Dhaka hotel in the capital in 2017.