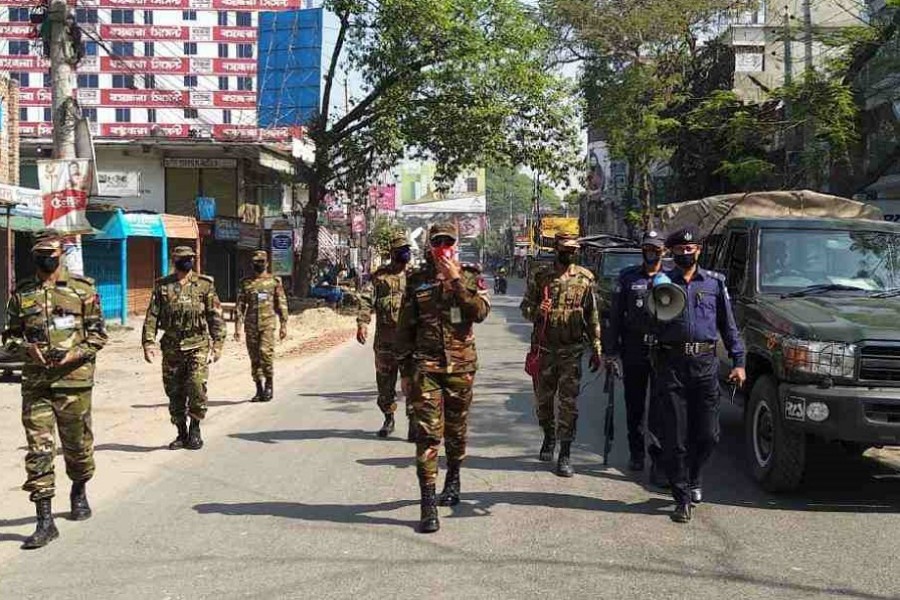 The government has directed law enforcers and local administrations not to do excesses with general people while performing duties in the field across the country to prevent the spread of coronavirus.

The directive came amid reports of harassment, torture and humiliation of people by members of law enforcement agencies and officials of local administrations in many places.

In a desperate attempt to curb the coronavirus in the country, the government declared a 10-day general holiday from March 26 until April 4.

Besides, bus, train, launch and air services were suspended and markets and shopping malls were shut down apart from the closure of all educational institutions.

Police and the local administration are working in the field to ensure that people maintain social distancing and overseas returnees remain in quarantine. Members of the armed forces are helping the civil administration in this regard.

However, law enforcers and the officials of local administration are reportedly doing excesses in dealing with people in many places, as per a UNB report.

In Jashore, Assistant Commissioner (Land) of Manirampur upazila Sayeema Hasan made three elderly people to do sit-ups holding their ears on Friday for not using masks.

The incident triggered huge criticisms and public outcry after a picture of the incident went viral on social networking site Facebook.

Photos and video clips of similar incidents have also gone viral on Facebook.

Under such circumstances, both police and local administrations have been instructed to behave well with people and be more professional to make them understand about government’s directives to curb the coronavirus.

Contacted, Home Minister Asaduzzaman Khan told UNB that the Police Headquarters has been directed to ask policemen to perform their duties with more professionalism and behave well with people.

They cannot obstruct people when they come out for emergency needs like buying food items, protective equipment, daily essentials, medicines and banking. “Police will have to help such people. No misbehaviour will be tolerated. Action will be taken if any allegation is found,” he said.

He said there is a monitoring cell at his ministry which is monitoring the activities of police.

Asaduzzaman also said law enforcers are alert so that there are no criminal activities using masks.

Meanwhile, Public Administration Secretary Sheikh Yusuf Harun said there is a directive for all the officials to behave well with people while performing duties in the field to ensure social distancing. “All the deputy commissioners have been directed to follow the instructions. They’ve been asked to ensure so that no one is harassed.”

About the Manirampur AC (Land) Sayeema Hasan, he said she has already been withdrawn and attached to the Khulna Divisional Commissioner’s office.

The secretary said departmental action will be taken against her following investigation when government offices will reopen, expressing sorrow over the incident.

However, this will not repeat as the district administration will remain alert, he said

The district administration have been directed to implement government directives as per rules, not by doing excesses, Yusuf said, adding that if anyone violates the rules, action will be taken in this regard. “If there’s any incident like that of Manirampur, no one will be spared.”

Contacted, Assistant Inspector General (AIG-Media) of the Police Headquarters Sohel Rana said police are in the field to ensure people’s welfare. “Over 200,000 policemen are working shoulder to shoulder with the people from the very beginning.”

He said they always direct their force to behave well and professionally with people. “But, still there’re few complaints where a number of police members are involved. Enquiry is going on,” he said, adding that action will be taken if those are found to be true.

Sohel Rana said people are urging police in social media platforms to go tough and police in some other countries have also taken a strict stance to fight the coronavirus. “Though there’re strict directives from us, very few policemen are seen to be moved by the public sentiment on social media and video clips of Indian police’s actions and out of personal stress for being exposed to the threat of corona and repeated non-cooperation from people.”

Army members are encouraging people who are unnecessarily gossiping or gathering at roadside tea stalls or other small makeshift markets to go back home. “They behave from a humanitarian angle whenever anyone comes out of home for urgent needs,” he said.

The ISPR director also said there is no incident of harassment by Army members since their deployment on Tuesday.

Army members are encouraging people to maintain social distancing and monitoring the issue of compulsory quarantine of overseas returnees. “They’re also spraying disinfectant across the country to prevent the spread of coronavirus,” he said.

When his attention was drawn to video clips, that have gone viral on social media, showing Army men harassing ordinary people, Zaid said those videos are fabricated.

US provides more medical supplies to BD to fight coronavirus