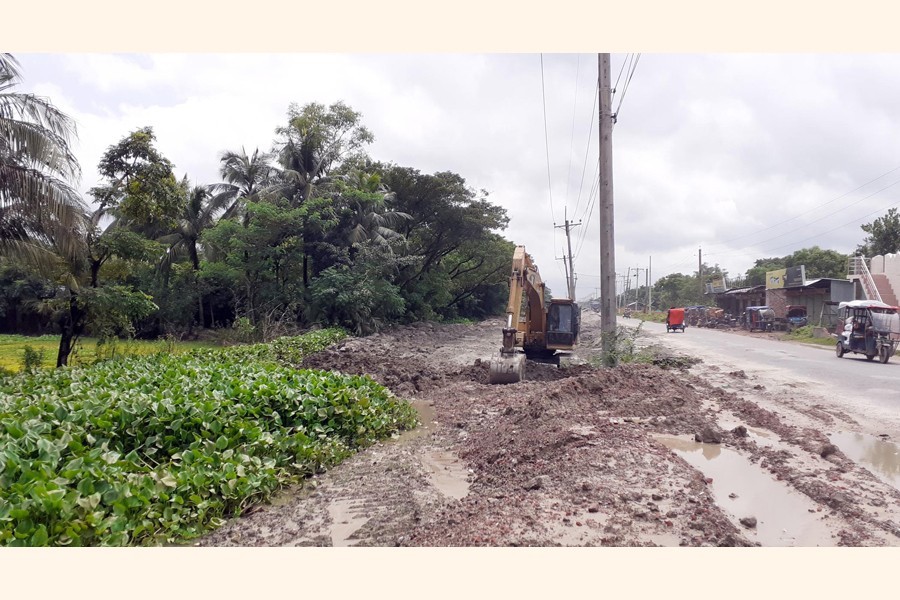 Berula canal in Cumilla is being filled up for the construction of the Cumilla-Noakhali four-lane highway. The picture was snapped from Batabaria area of Laksham upazila — FE Photo

Some 3,000 acres of agricultural land are set to face an irrigation crisis in Cumilla and Noakhali as a century-old canal is being filled up to construct the Cumilla-Noakhali four-lane highway.

Extending over an area of 60 kilometres in length, the Berula canal starts at Fatehpur village in Cumilla's Laksham upazila and ends at Chaumuhani in Noakhali's Begumganj upazila.

The canal had long been being filled up slowly with construction of shops and houses at its various points. And it gained pace recently with the construction of the four-lane highway.

According to locals, most parts of the canal in the area have been filled up just to widen the four-lane road. At some points, the canal has been reduced to a narrow drain.

The canal has been entirely filled up at Batabaria and Bhatiavita in the south part of Laksham municipality, resulting in an irrigation crisis for farmland. Natural fish sources are also at stake.

As a result, some 3,000 acres of agricultural land in Laksham, Manoharganj and Nangalkot upazilas of Cumilla and Sonaimuri and Begumganj upazilas of Noakhali are set to experience an irrigation crisis.

Locals said this canal was once used to transport goods from Noakhali to Laksham Daulatganj Bazar by boat.

Vessel movement on the canal was closed due to encroachment and construction of unplanned bridges over it.

Local fishermen once used to run their families by fishing in the canal, which has now turned into a drain-like a narrow channel for want of excavation.

As the whole canal is now being filled up to construct the four-lane road, farmers are worried whether they could produce crops in their land next year.

The canal is connected to Laksham, Manoharganj and Nangalkot of Cumilla and Sonaimuri and Begumganj of Noakhali and various branch canals.

If Berula canal is filled up, different areas of these upazilas will be affected by severe water-logging.

Mostafizur Rahman, former chairman of Khila union in Manoharganj Upazila, said the canal was renovated in 1978 through voluntary work. The canal was used to bring goods from Noakhali to Laksham's Daulatganj market by boat.

Once the canal is filled up, the people of this region will become victims of water logging.

Agricultural land will fall into an irrigation crisis. This will increase suffering of the people.

Laksham Upazila Nirbahi Officer (UNO) AKM Saiful Alam said, "As far as I know, the canal is owned by the Roads and Highways Department. They are filling up the canal for constructing the four-lane road. So I have no scope to say anything about this."

Mizanur Rahman, executive engineer of Bangladesh Agriculture Development Corporation (BADC Irrigation), Cumilla, said there is no alternative to the flowing canal to save agriculture. We will look into the matter."

Bangladesh Environment Movement (BAPA) Cumilla president Dr Mosleh Uddin Ahmed said it was illegal to fill the canal. Rivers and canals must be protected to save the environment, nature and agriculture.

Cumilla Deputy Commissioner Abul Fazal Mir said, "I don't know about filling up the canal. However, I will take necessary steps in this regard."

Roads and Highways Department Cumilla Executive Engineer Dr Mohammad Ahad Ullah said, "I will see the matter. However, if it is necessary for the road, the canal has to be filled up."