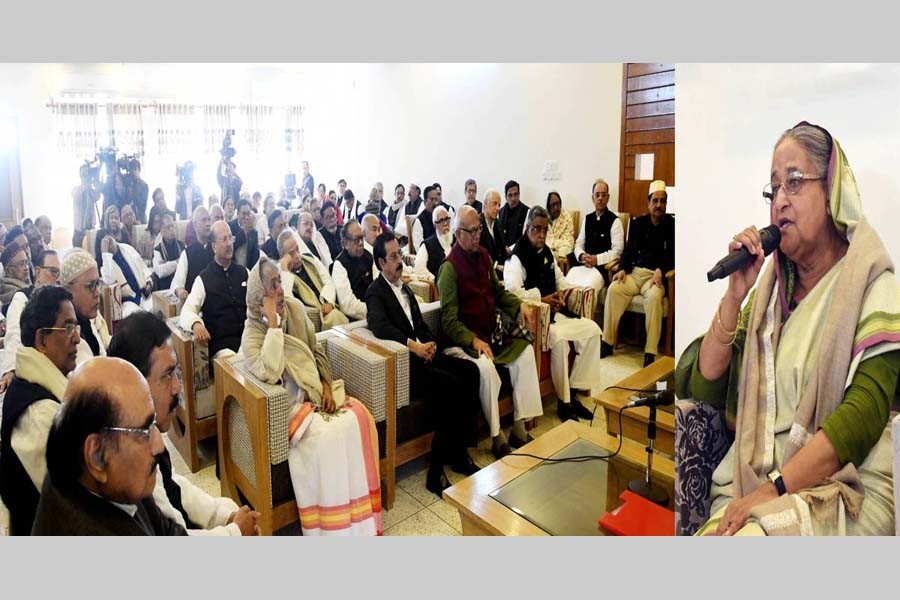 "We're working tirelessly so that the grassroots and rural people get the benefits of our achievements," she said.

The Prime Minister said the main goal of the government is to change the luck of the countrymen.

"Every leader and worker of the party will have to move with the ideology of the Father of the Nation. We'll build a hunger and poverty free Sonar Bangla as dreamt by Bangabandhu," she said.

In this connection, she mentioned that Bangladesh has already attained high growth rate and has a strong economy. "...We'll continue our drives against terrorism, militancy and corruption," she said.

Sheikh Hasina said the party has been in power for three consecutive terms after the 2008 election. It was in office from 1996 to 2001. "As a result, the country's progress is visible and the people's fate is being changed," she said.

The Prime Minister said the government has drawn up elaborate programmes to celebrate 'Mujib Barsho' nationally. "Besides, other organisations and institutions will celebrate Bangabandhu's birth centenary in a befitting manner," she said.

Sheikh Hasina said the name of the Father of the Nation was once wiped out by assassinating him on August 15, 1975. "But today none could erase his name because he struggled and suffered throughout his life for the people of the country," she said.

She said Bangladesh won independence through 24 years of struggle and earned its victory in the Liberation War under the leadership of the Father of the Nation.

The premier said over 82 per cent people lived under the poverty level when Bangabandhu liberated the country.

"But our Awami League government has been able to bring down the (poverty) rate to 20.5 per cent," she said.

She said the Father of the Nation liberated the country to change the lot of the exploited and deprived people and he also started the work to this end.

"But we're unfortunate that Bangladesh was deviated from that ideology and spirit after the brutal killing of Bangabandhu," she said.

Hasina said the country started its journey towards development again when the Awami League government assumed office after 21 years.

"It has been possible as we're following the ideology of the Father of the Nation," she said.