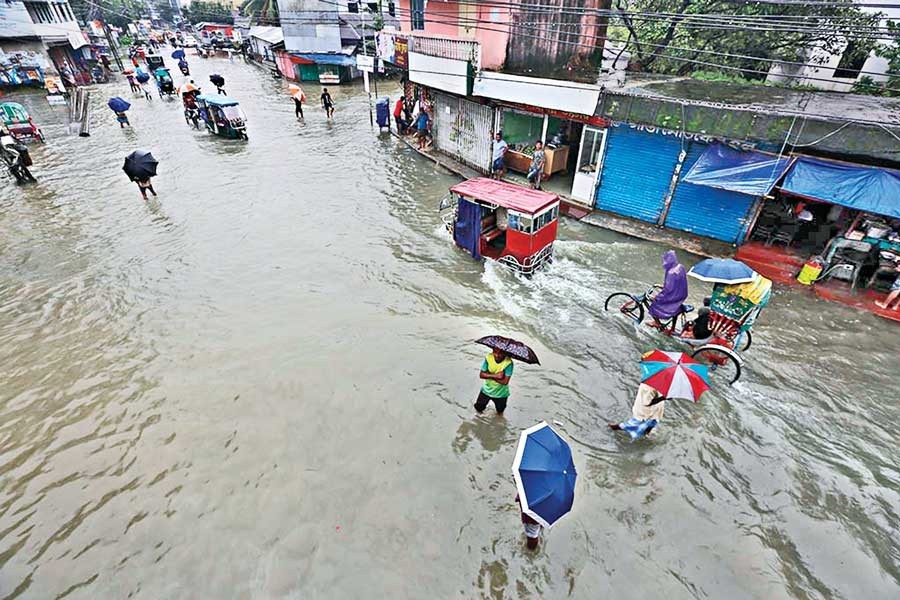 A flooded road in Sunamganj town on the banks of the Surma River on Sunday — bdnews24.com

The continued rising of big rivers amid heavy rainfall and onrush of upstream water aggravated the flood situation in many districts in Bangladesh on Sunday.

The Flood Forecasting and Warning Centre (FFWC), however, forecast a moderate-to-severe flood might last this month in northern, north-eastern, central and some southern regions.

However, shortages of food and sanitary supplies put thousands of marooned people in great difficulties.

Because of heavy rainfall and water from upper-riparian areas, river basins of Brahmaputra-Jamuna, Padma- Ganges and Upper Meghna are in floods.

The floodwaters might continue to flow for the next 72 hours, said FFWC forecaster Md Arifuzzaman Bhuiyan.

Ten major rivers were flowing over danger level while water level at 76 river stations across the country marked a rise on Sunday, according to the centre.

Rainfall was recorded as 150 millimetres (mm) in Sunamganj, 148mm at Lalakhal, 121mm in Thakurgaon, 108mm in Kamalganj, 104mm at Manurailway bridge, 98mm in Moulvibazar, 95mm in Sylhet and 92mm at Lorergar.

The rainfall in upper-riparian India was 266mm in Cherrapunji, 244mm in Shiliguri, 162mm in Coch Bihar, 128mm at Koilashar and 145mm in Jalpaiguri during the period, it mentioned.

The inflated rivers caused thousands of people to leave their houses in the total absence of any state assistance to help them evacuate from low-lying areas.

The Jamuna, Surma, Jadukata and Someswari are also flowing nearly a metre above danger level as a deluge is forecast for the region in the next three days.

Sources said many of the victims lost their valuables while crossing floodwaters.

A total of 1.75-million people have so far got marooned in 19 districts by flood that began in the last week of June, according to Bangladesh Water Development Board.