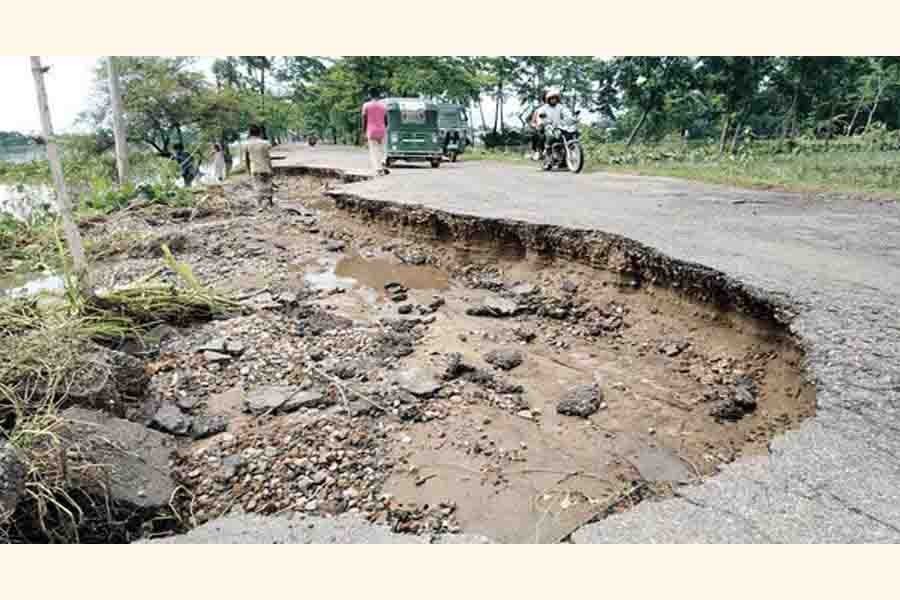 SYLHET: The extent of damage to the roads in Sunamganj district, by the last week's flood has been estimated to be over Tk 800 million, official sources informed.

A number of important roads at some places had already been washed away or got damaged severely, causing suffering to the pedestrians as well as the vehicles of all types. The district town's road link with three upazilas-Jamalganj, Tahirpur and Doarabazar has been disrupted.

Jamalganj upazila has been cut off with the Jamalganj-Kathoir road at Ujjalpur and the Noagaon-Katakhali area on Doarabazar-Sunamganj road has been washed away by the gushing waters. The damage to about 100- km of LGED roads has been estimated preliminarily to be at Tk 600 million, an official informed.

Damage to the five different roads belonging to Roads & Highways (R & H) would be worth over Tk 200 million, said an official. The loss was due to the floods, caused by the excessive rains coupled with rolling of waters from the upstream in the Meghalayan hills in India.

The roads include Biswambharpur-Kachirgati, Niamatpur-Tahirpur, Sunamganj-Jamalganj, Sunamganj-Doarabazar and Chhatak- Jawabazar roads. The major damage was caused to 11- km area while at places the roads were either breached or washed away. The cost for repairing these roads may be about taka 210 million, the official said.

Sub-Divisional Engineer of the R&H, Sunamganj Kazi Nazrul Islam said a damage report in this regard had already been sent to the higher authority.

Meanwhile, UNB adds from Sherpur: Narayankhola Dakshin Primary School, an old school in Nakla upazila of sherpur, is being gobbled up by the Mrigi River.

River erosion has taken a severe turn in the area. Although the Water Development Board is placing geobags, already one third area of the school has been eaten up by the river, said Shamsun Nahar, headmistress of the school.