Farmers in Bogura cultivating Boro with fear of loss 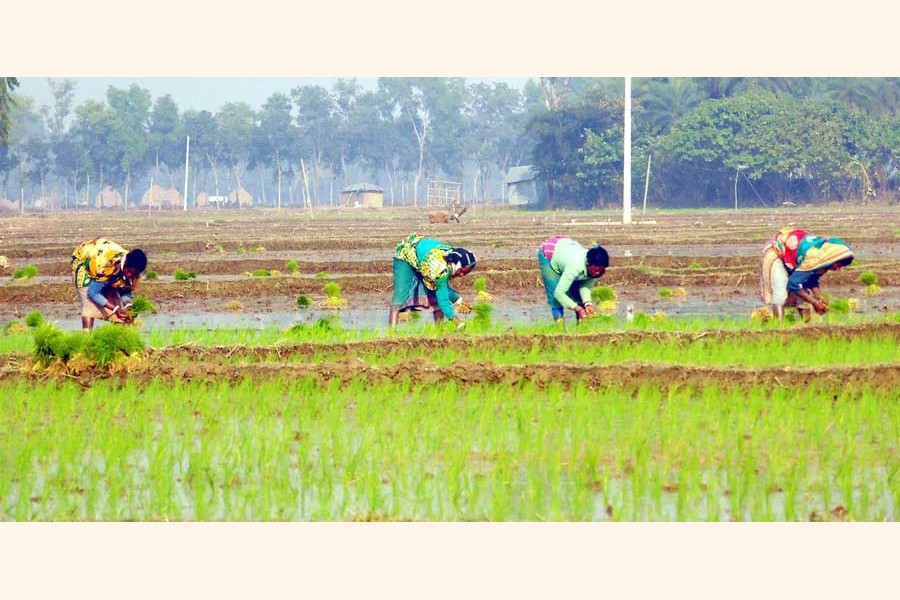 BOGURA, Jan 15: Farmers of Bogura district have started cultivating Boro paddy this season with fear of further loss after getting unfair price of Aman paddy.

The farmers had to sell Aman paddy at relatively lower price than the last year- at Tk 600 to 700 per mound- with an uncertainty whether they could recover the production cost.

With such hesitancy, they opted for cultivating Boro paddy this season.

Although the production cost of paddy is increasing day by day, the price of paddy does not increase accordingly.

Transplantation of Boro seedlings has started on a small scale in all the twelve upazilas of the district.

The farmers as well as wholesalers from the district send rice across the country after the local demand is met.

According to Department of Agriculture Extension (DAE) office sources, the target of cultivating Boro paddy has been set at around 0.2 million hectares of land during the current season.

If the weather condition remains favourable till the harvesting period, the farmers will get around 0.8 million tonnes of fresh yield, the DAE sources added.

"I have started cultivation of Boro paddy with a golden dream after taking loan from a local NGO at high interest," said farmer Nizam Uddin Shekh.

Upazila Agriculture Officer Mashidul Haque of Nandigram said the farmers of this upazila have a lot of experience in producing paddy.

"We are supporting farmers by providing logistic support," he added.

Deputy Director of DAE Md Abul Kashem Azad said by the month of February, transplantation of seedlings will be completed.

"We have started field-level activities with the target of bumper yield of Boro rice this season," DD added.

Our Nilphamari correspondent writes: Boro cultivators in the district are worried as severe cold weather has been damaging paddy seedlings over the past couple of weeks.

A good number of farmers informed this correspondent that dense fog is stunting growth of the paddy seedlings.

Paddy seedlings are turning yellowish due to the disease called cold injury.

Most of the Boro farmers could not yet start cultivation of the crop, the growers said.

The Department of Agriculture Extension (DAE) sources said Boro cultivation target for the district has been set at 79,443 hectares of land this season with the production target of 3,29,671 tonnes.

A DAE official said Boro seedbeds were prepared on 3,663 hectares of land across the district.

Azmal Hossain, sub-assistant agriculture officer of Khogsabari union council under Nilphamari Sadar, said, "We advise the farmers to remove dew from the seedlings in the early hours of morning. Use of lukewarm water in irrigation is also helpful this time."

Some growers told this correspondent if such weather condition prevails for a few more days Boro farming will be hampered seriously.