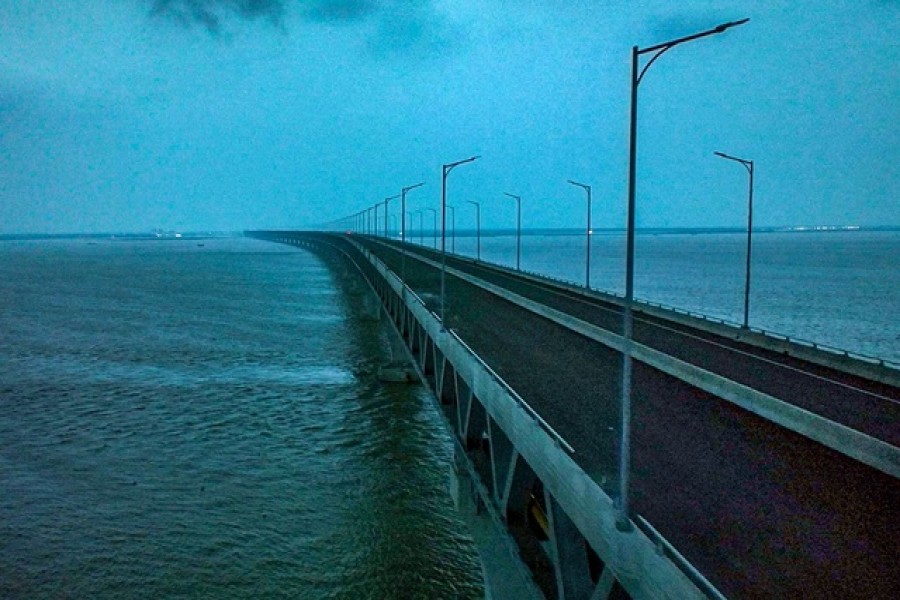 Although the Padma Bridge offers tremendous economic opportunity, the main challenge is now to exploit this huge opportunity, said experts on Tuesday.

Addressing a discussion on the recently inaugurated Padma Bridge organised by the Foreign Ministry they also observed that the successful completion of the bridge would help promote the Bangladesh Brand across the world.

Foreign Minister Dr AK Abdul Momen noted that the bridge signifies the dignity of Bangladesh as the quarters which tried to demean Bangladesh got a befitting reply through the opening of the bridge.

He said that the bridge also proves that what the foreigners say, is not always right.

They harassed and maligned some officials of the country raising allegations of corruption and withdrew funding for the project.

They should now voluntarily seek an apology for their wrongdoings, he added.
Their prescription and their sanction aimed at materializing their interest, Dr Momen noted.

Dr Mashiur Rahman, economic adviser to the Prime Minister, urged the foreign ministry to create an archive on the Padma Bridge compiling the technical, official and other documents.
Terming the Padma bridge construction a complicated one, he said that though the river training was very critical, the solutions were devised by Bangladeshi consultants.

He narrated the background of the decision taken by Minister Sheikh Hasina to construct the Padma bridge with domestic funding and said that the bridge symbolizes the self-respect and dignity of the country.

The industrial and agricultural sectors will have a big boost due to the direct link, he said adding that the affiliated services sectors will also expand.

This region lags behind in industrialization as it was not connected with the main economic corridor of the country but now the bridge establishes the connection, he said and noted that now the government should concentrate on encouraging investors home and abroad.

After the inauguration of the Jamuna Bridge, the economic benefit was not seen during the initial years but now the north Bengal is turning into an industrial hub, he said.

The main reason for the delay is that Bangladesh was not that strong economically when the Jamuna bridge was opened but the country can reap the benefit of the Padma bridge as it has a solid economic footing now, he added.

The Bridge which is a part of the Asian Highway will play a pivotal role in regional integration through enhancing connectivity with South Asian countries, ASEAN, Professor Raihan said.

Since the beginning, many global players were sceptical about the success of the project and it became a litmus test for Bangladesh, he said.

As the bridge was inaugurated Bangladesh proves its capability, and it strengthens the Bangladesh brand, he added.

State Minister for foreign affairs M Shariar Alan said the successful implementation of the bridge project brighten the image of the country.

Former Bridge Division Secretary Mosharraf Hossain Bhuiya, who was accused by the World Bank of irregularities regarding the bridge project, said by inviting him and other accused officials to the inauguration of the bridge, Prime Minister Sheikh Hasina showed the greatness of her heart.