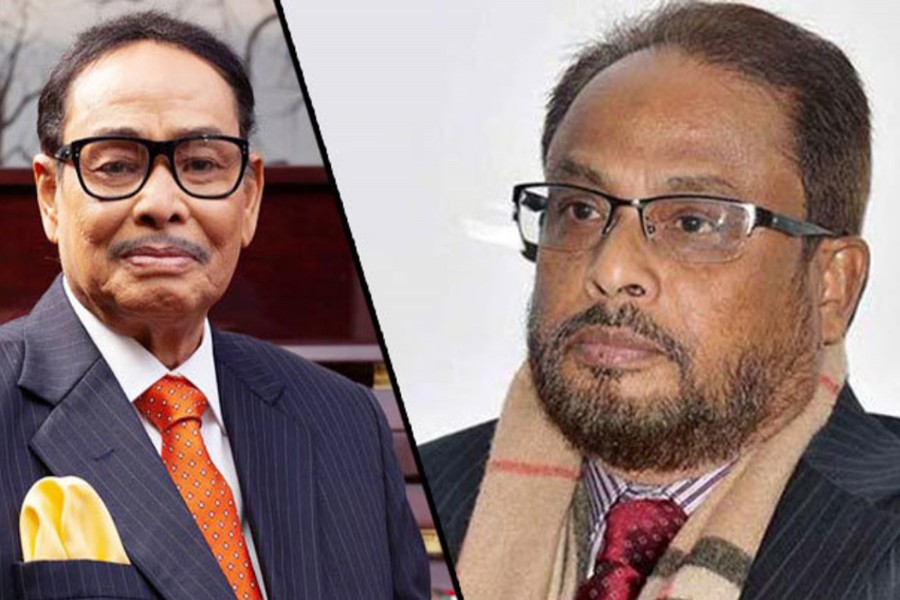 Jatiya Party Chairman HM Ershad has dismissed his brother GM Quader as the party's co-chairman, citing his 'failures' after several attempts to install him as his heir.

Ershad made the announcement two days after his 89th birthday celebration where his wife and party’s Senior Co-Chairman Raushon Ershad sang a song for him on Friday night.

Raushon and her followers had earlier foiled Ershad’s bids to make Quader his successor.

Ershad removed Raushon as the leader of the official opposition in parliament after her five years in the office following the last general election.

He himself holds the post now while Quader is the deputy leader of the official opposition in parliament.

Quader will remain in the party as a member of its presidium but his fate as deputy leader of the official opposition in parliament is up in the air, according to Ershad’s announcement.

Between the December 30 parliamentary polls and his trip to Singapore for treatment in January, Ershad had announced that Quader would do the duties of chairman in his absence.

In Friday’s announcement, Ershad said he thought Quader would run the party and hoped his brother would be made chairman in the next council, but Quader has let him down.

“I am withdrawing that announcement now considering the overall condition of the party.

“As Mr Quader has utterly failed to run the party, the organisational activities of the party have slowed down, and as he has created division in the party, the senior leaders have expressed their inability to do politics under his leadership,” Ershad said.

“I will speak about it later, not now,” Quader said when contacted for comments on the latest development.

Around three years ago, Ershad had named Quader as his heir in the party by appointing him as co-chairman and declaring the decision in his Rangpur stronghold.

Known for changing his stance, Ershad had later made Raushon senior co-chairman following growing resentment among a section of the leadership over the promotion of Quader.

Quader had shown allegiance to Ershad by opting not to leave his brother's side when the Jatiya party chief announced a boycott of the last general election.

Raushon walked in the opposite direction. Later, Ershad was whisked off to hospital by law enforcers in charge of his security due to ‘illness’ during the elections, and ended up contesting and winning the popular vote, bdnews24.com reports.

After taking charge as the leader of the opposition in parliament, Raushon had said everything had happened with Ershad's 'consent'.

Ershad said he would disclose 'everything when the time comes', but nothing has been forthcoming.

The deposed military dictator started a drama during the elections this time again by getting hospitalised for illness. He later travelled to Singapore for treatment.