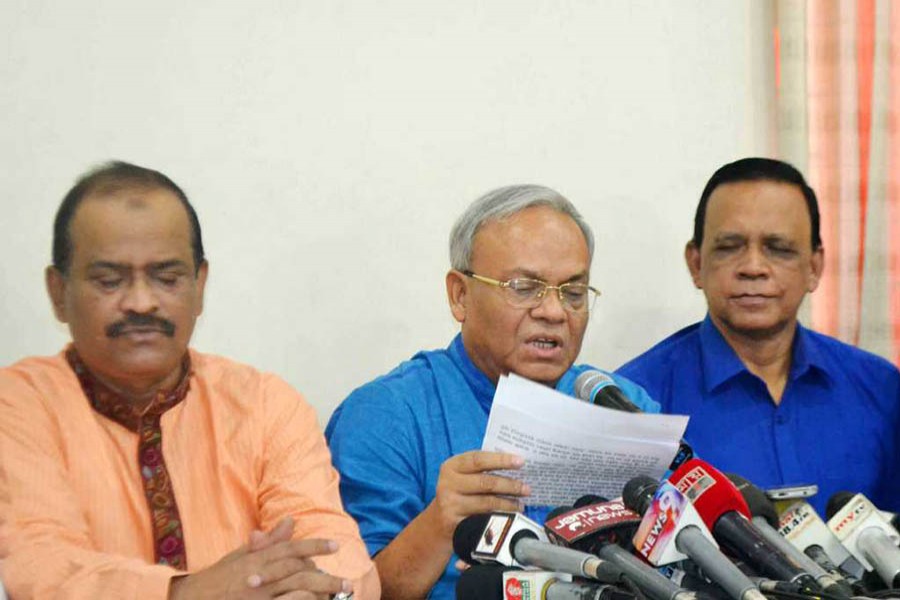 UNB file photo of Rizvi speaking at a programme

The BNP has accused the Election Commission of providing special privileges to the ruling Awami League.

“The Election Commission is providing ruling party members with information and easy access to its offices,” BNP Senior Joint-Secretary General Ruhul Kabir Rizvi said in a news briefing on Friday.

“The Election Commission has turned into an office for the Awami League.”

Rizvi particularly blamed Mostafizur Rahman Babla, a member of the Awami League sub-committee on election, for extracting information from officials through intimidation.

“He gathers information from the EC office by threatening the officials. The talented officials at different levels are scared of him,” said Rizvi as he showed photographs of Babla with the EC secretary and other high-ups.

“Babla threatens to transfer the officials labelling them as ‘anti-government’ if they refuse to provide information. He is on very good terms with the EC secretary. The commission has never taken any measure when we brought this issue to its notice.”

Rizvi criticised the partisan activities of Farhad Ahmed Khan, joint-secretary at the election management division of the EC.

Rizvi also condemned the arrests of 68 BNP leaders and activists, including Nipun Roy Chowdhury, and asked the government to release them.

Babla denied the allegation raised by BNP leader Rizvi saying he visits the Election Commission for party work and everything he does is in line with the rules, bdnews24 reports.

“As a registered political party, we make written communications with the EC. Journalists also visit the office and I gather information just like them. No-one can ever claim that I have forced anyone for information,” said Babla when asked about the allegation.

“It is not a crime to collect a copy of the code of conduct for my party. The BNP is fabricating lies against me shamelessly,” he said.

“The Election Commission is a constitutional organisation and the Awami League knows how to respect it,” said AL Deputy Office Secretary Biplab Barua responding to the allegation that the EC office turned into an “AL office”.

“It’s a complete lie. It’s a shame that a national-level leader is lying. It’s funny as well.”

Reporters could not reach the Election Commission for its comments on the BNP’s allegation.