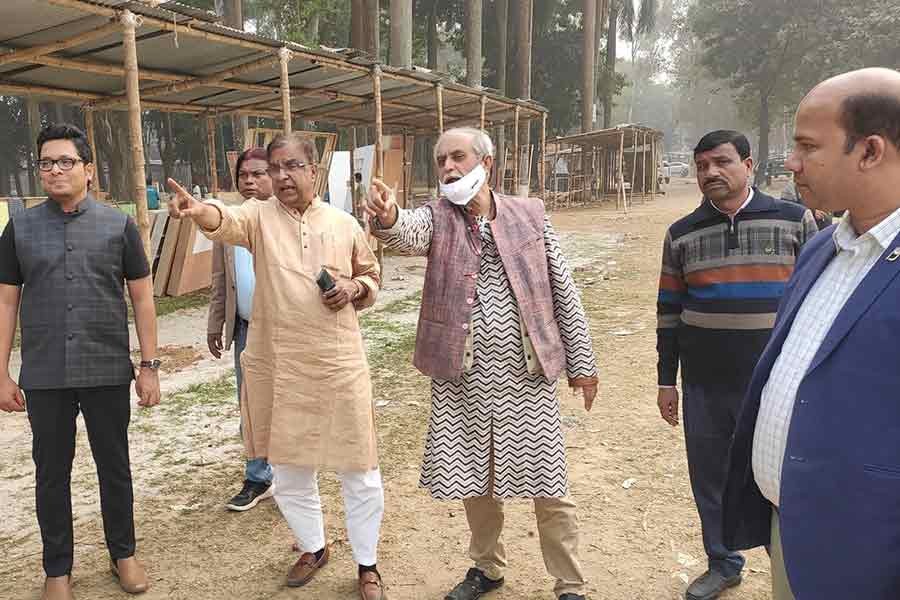 State Minister for Cultural Affairs K M Khalid visited the premises of Amar Ekushey Grantha Mela 2023’ to witness the progress of the preparation to hold the fair.

The month-long ‘Amar Ekushey Grantha Mela 2023’, the country’s largest book fair, is going to begin on its traditional date of the first day of February this year after three years interval.

In 2020, the traditional book fair began on February 2 due to elections to the two Dhaka city corporations while the fair was differed till March 18 in 2021 and February 15 in 2022 due to the global coronavirus pandemic.

Muzahidul, also Bangla Academy director (administration, human resources and planning division), said about 80 per cent of the preparatory work has already been completed on Bangla Academy and Suhrawardy Udyan premises.

While visiting the book fair venue, it was observed that preparations for the book fair are going on in full swing on Bangla Academy and Suhrawardy Udyan premises since the fair management committee hoped that the preparation would be completed before the stipulated time.

State Minister for Cultural Affairs K M Khalid on Monday visited the fair premises and inspected the progress of the preparation.

Noting that some changes have been brought to this year's fair, he said that the main stage of the fair will be on the Bangla Academy premises while book unwrapping and Lekhak Bolchi stages will be set up on Suhrawardy Udyan premises.

A total of 704 stalls except the pavilions will take part in this year's book fair.

Besides, 182 stalls and 11 pavilions adjacent to the Institution of Engineers, Bangladesh have relocated to the centre of the Suhrawardy Udyan due to the Metrorail while that spot has been allocated to a food court and other service provider institutions.

The Temple gate of the Suhrawardy Udyan just opposite to the Bangla Academy will be the main gate for entering the book fair while the visitors could find their required stalls through digital boards and placards.

The children's yard will be near the main gate, which will entertain the children with different events including Sisimpur.

At the end of this year's book fair, four awards will be given under different categories.

Of them, the 'Chittaranjan Saha Smriti Award' will be given for the highest number of books published in 2022, considering the content and quality of the book.

'Artist Qayyum Chowdhury Smriti Award' will be given to a stall from those, which will take part in this year's book fair, considering the best decoration.