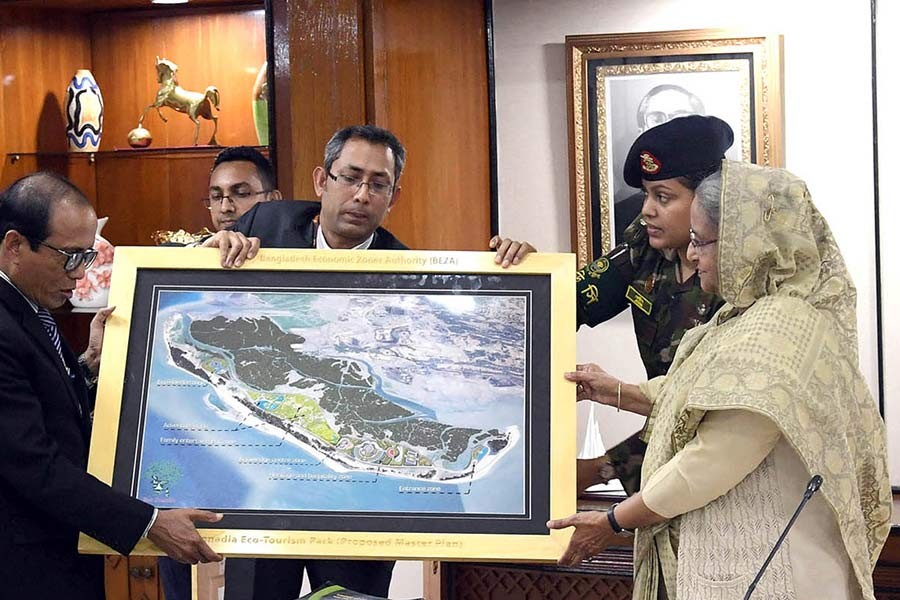 Prime Minister Sheikh Hasina receiving a master plan of a eco-tourism park, to be developed at Cox’s Bazar, from concerned officials during a meeting at PMO in Dhaka on Wednesday. -PID Photo

Prime Minister Sheikh Hasina has asked the authorities concerned not to build high-rise establishments along the sea in Cox’s Bazar.

“We will not allow construction of high-rise establishments along the sea as it will harm the natural beauty of Cox’s Bazar ,” she said, adding tourism parks should be developed keeping intake the natural beauties of the region.

The prime minister made the remarks while witnessing a presentation of master plans of three special tourism parks to be developed at Cox’s Bazar, reports BSS.

The Bangladesh Economic Zones Authority (BEZA) has been entrusted with setting up the Sonadia Eco-Tourism Park in Moheshkhali upazila and NAF and Sabrang Tourism Parks in Teknaf upazila in Cox’s Bazar.

The aim of the master plans is to develop tourism-friendly zones protecting ecological balance and biodiversity, country’s heritage, culture and tradition as well as to establish bridge among other tourism sites under Cox’s Bazar district and adjacent areas.

Sheikh Hasina also directed the authorities concerned to construct establishments in the tourism parks ensuring those to be tolerant to disasters such as earthquake, cyclone and tidal surge.

Describing the Cox’s Bazar sea beach as the world’s longest sandy sea beach, she said the 80-mile sea beach is one of the beautiful tourist spots of the world.

The premier advised to develop the Sabrang Tourism Park as a “dedicated tourist site” for the foreigners.

She also instructed the authorities concerned to ensure all necessary facilities maintaining international standards so that foreign tourists could be attracted to visit the region to witness natural beauties.

Talking about Naf Tourism Park, Sheikh Hasina asked the authorities to complete its construction works within next three years.

She also gave necessary guidelines to the concerned authorities to ensure various facilities in the three tourism parks.

The consultancy firm which prepared the master plan for Sonadia Eco-Tourism Park has assured the premier that the tourists could visit the park within 24 months while it will take nine years to give a complete shape of the park.

At the directives of the prime minister, the BEZA has undertaken steps to develop the tourism parks by protecting ecological balance and conserving biodiversity in the coastal area.

Development Design Consultant Bangladesh and DOHWA Consultant Limited, Korea have been appointed as consultancy firms to set up Sabrang and Naf Tourism Parks.

Only 909 acres of land out of 8967 acres of Sonadia will be used for developing the eco-tourism park, while the rest of the area will be kept intake, officials concerned said.

Earlier, BEZA Executive Chairman Paban Chowdhury gave an overview on the three master plans saying the plans would be finalised within a month as per latest guidelines of the Prime Minister.

The Prime Minister asked the authorities concerned to complete the development works of the Naf Tourism Park and Sabrang Tourism Park within three years.

Sabrang Tourism Park will be the first exclusive tourism park in Cox’s Bazar district encompassing an area of 1,047 acres at Sabrang union in Teknaf upazila.

Sabrang Union is an amazing hill and sea beach territory with multifaceted and admirable beauty.

The Naf Tourism Park, popularly known as Jaliardwip, will be the first island based tourism park in Bangladesh encompassing an area of 271 acres.

Naf Tourism Park is located on an egg-shaped island raised in the middle of the Naf River under Teknaf Upazilla of Cox’s Bazar.