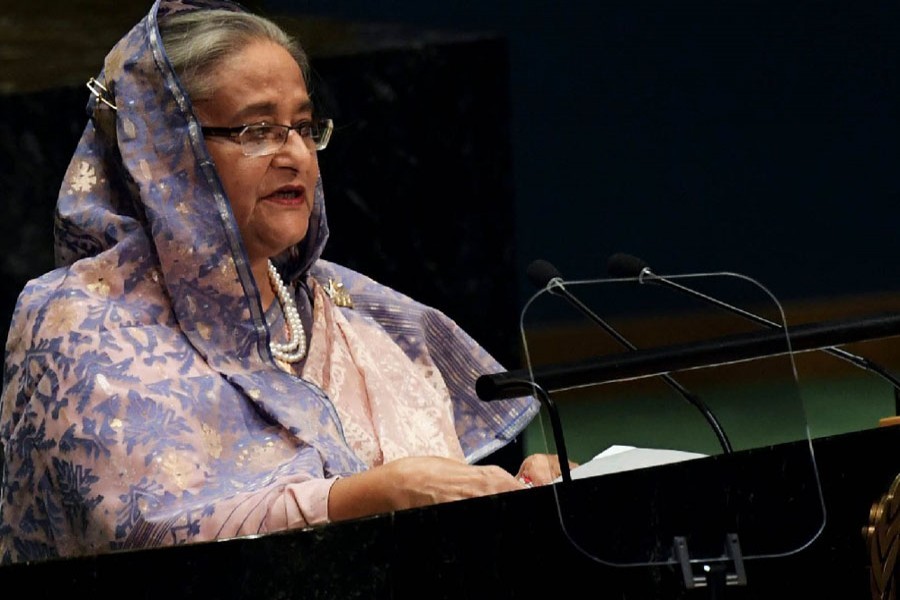 Prime Minister Sheikh Hasina on Tuesday called for not allowing geopolitical rivalries to weaken the United Nations (UN) as the coronavirus (Covid-19) pandemic has shown that both developed and developing nations need the UN more than ever.

“We must not allow our geopolitical rivalries to weaken the UN. We owe it to the founding fathers and future generations to make the UN a truly effective global body for humankind as a whole,” she said.

The Prime Minister said this while delivering her speech virtually in the early hours on Tuesday (Bangladesh Time) at the high-level event arranged to mark the 75th anniversary of the United Nations at its headquarters in New York, reports UNB.

She said the challenges of the present time, including the current pandemic, go beyond borders and the Covid-19 has made the achievement of the 2030 Agenda more challenging. “It has exposed the inadequacies of the current international order,” she added.

“At the same time, the pandemic has shown that both developed and developing nations need the UN more than ever. It has shown us that multilateralism is the way forward,” she said.

Sheikh Hasina urged the United Nations to provide a credible and practical roadmap for delivering on commitments and responding decisively to global challenges.

“To take the UN on the right course towards its centenary and beyond, UN@75 should provide a credible and practical roadmap for delivering on commitments and responding decisively to global challenges,” she said.

Noting that the 75th anniversary celebration of the United Nations is a momentous occasion for all, the Prime Minister said the commemoration bears special significance in Bangladesh as it coincides with the Birth Centenary of Father of the Nation Bangabandhu Sheikh Mujibur Rahman.

She mentioned that Bangabandhu at the UN assembly in 1974 had said, "……. the United Nations remains the focus of man's hope for the future."

“We have seen moments in history that made us re-group to change the course of human civilization. UN@75 presents another such moment.  Let us seize this moment,” said Sheikh Hasina.

The Prime Minister said Bangladesh owes a lot to the UN as it has benefitted from UN-led efforts for its development.

“We are committed to upholding peace across the world. Currently, Bangladesh is the leading troops and police contributing country in all peace operations,” she said adding that some 150 of Bangladeshi peacekeepers sacrificed their lives to secure peace in conflict-ravaged countries.

Sheikh Hasina in her speech commended the UN Secretary-General for keeping the flag of multilateralism high.