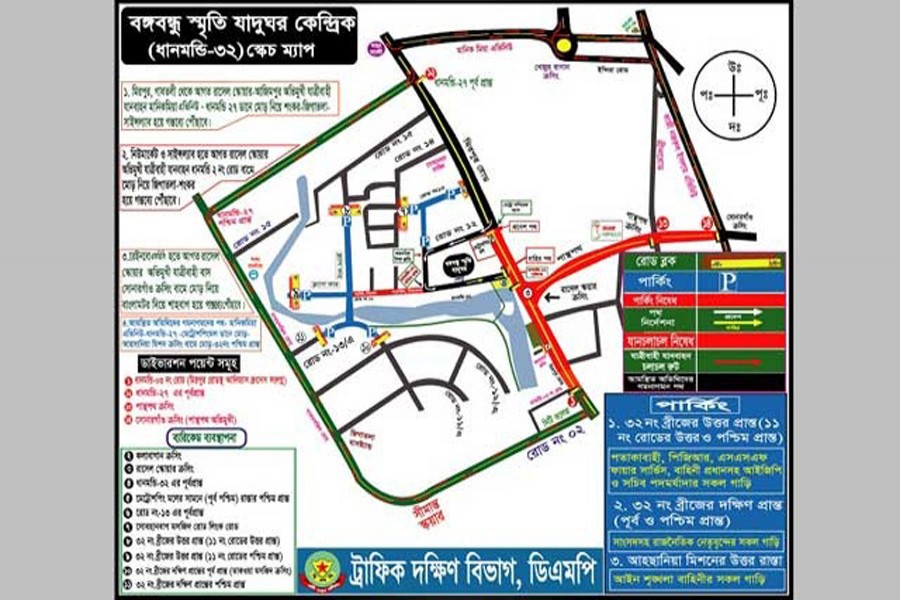 Dhaka Metropolitan Police (DMP) has issued traffic guidelines for the capital ahead of National Mourning Day and the 44th death anniversary of Bangabandhu Sheikh Mujibur Rahman on August 15.

Traffic will be curtailed near Bangabandhu Memorial Museum at Dhanmondi Road 32 and adjacent streets from dawn till the end of a ceremony on Thursday that will see the president, the prime minister, cabinet members, and people from all walks of life pay homage to Bangabandhu, according to DMP.

>> Russell Square-Azimpur-bound vehicles from Gabtoli will be diverted to Dhanmondi 27 and arrive at their destinations via Shankar-Jigatola-Science Lab.

>> Russell Square-bound vehicles from New Market and Science Lab will be diverted to the Jigatola-Shankar route.

>> Russell Square-bound buses from Rainbow FDC will be diverted to the Sonargaon Crossing-Bangla Motor-Shahbag route.

>> Those coming to pay respects at Bangabandhu Memorial Museum via Manik Mia Avenue-Dhanmondi 27 must enter through the street next to Metro Shopping Mall and take a left turn in front of Ahsania Mission to reach Dhanmondi 32.

Cars belonging to PGR, SSF, fire service, army chief, IGP, secretaries and other flag-bearing vehicles will be parked to the north and west of Dhanmondi road 11, reports bdnews24.com.

The east and west sides of Dhanmondi 32 Bridge have been designated for parking vehicles of political leaders, including MPs. The vehicles of law enforcement officers will be parked to the north of Ahsania Mission.

Police Commissioner Asaduzzaman Mia has sought everyone’s cooperation in this regard.