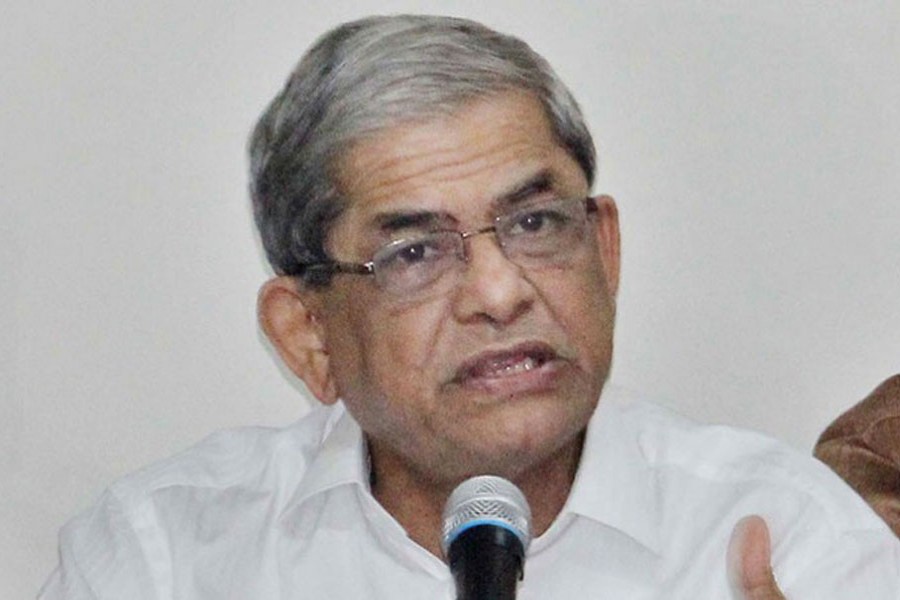 BNP Secretary General Mirza Fakhrul Islam Alamgir has said the planned election-time dialogue will not be meaningful, with the party chief Khaleda Zia serving her time in jail.

Fakhrul joined other party leaders in a human chain on a key Dhaka road on Wednesday. His comments came just a day before the scheduled dialogue with Prime Minister Sheikh Hasina at Ganabhaban. He is scheduled to join the event as a leader of the new political alliance led by Dr Kamal Hossain, bdnews24.com reports.

The BNP formed the human chain to demand the cancellation of jail sentences for Khaleda leading to her freedom in two corruption cases.

“The government is proposing a dialogue on one hand, while on the other, Begum Khaleda Zia's jail sentence has been doubled. These are contradictory and never reflect democratic behaviour. The sincerity that the dialogue requires is absent.”

On Tuesday, the High Court scaled up the jail term to 10 years from five years for Khaleda in the Zia Orphanage Trust graft case.

A three-time former prime minister, Khaleda has been sentenced to five years in prison on Feb 8, when the court found her guilty of embezzling foreign donations made to an orphanage.

On Monday, Khaleda was sentenced to seven years in prison each for embezzling Tk 31.54 million from the Zia Charitable Trust.

The BNP leaders condemned the verdicts, saying that the judgments were designed to keep Khaleda out of the election.

"We want to make it clear that no dialogue or election will be fruitful if the country’s leader is kept in jail.”

The BNP secretary-general urged all to unite to galvanise the ongoing movement to “win back” their voting right.

Thousands of BNP leaders and activists and its linked organisations took part in the hour-long human chain on a stretch of a road from the Dhaka Press Club to SAARC Fountain.

They lined the road with placards in hand demanding the release of Khaleda and the cancellation of Tarique Rahman's jail term.

On the dialogue with the ruling Awami League, Fakhrul said: “The government must accept our seven demands—all of them. First of all, the government must resign, the parliament should be dissolved and the Election Commission must reform itself to ensure a free and fair election.”

"The first condition is that the government must free Begum Khaleda Zia from jail. No election will be meaningful if she is not released.”

In a direct appeal to the government, Fakhrul said, “Return to the path of democracy and create a democratic environment.”

Fakhrul said there’s no level-playing field for the election as the ruling party leaders are travelling to their voter bases by helicopter and BNP leaders and activists, by contrast, are running away from the police for fear of arrests.

“Our leader is in prison, and our party members are always on the run.”

Khandaker Mosharraf Hossain, a BNP Standing Committee member, said: “The doubling of a jail term for Begum Khaleda Zia is unprecedented and unusual. It was done on purpose. The government is keen to shut Khaleda Zia and the BNP out of the election.”

"We’ve said that the 2014 election was no election at all as it was boycotted by the BNP. Today, I want to say it again that the next election will not be participatory, without Begum Khaleda Zia in it.”

“If the seven demands, including Khaleda Zia's release, are not fulfilled, Bangladesh will slide into anarchy and uncertainty and the government will have to take responsibility for that,” he said.

Another BNP leader, Moudud Ahmed, said, "Many ministers have said that they do not believe in the dialogue. Now they understand the importance of the dialogue and read the mind of the whole nation. So they agreed to this dialogue. We welcomed it.”

"The dialogue, election and our movement will move together. We must prepare for this.  We will continue our movement as long as our success remains far off.”