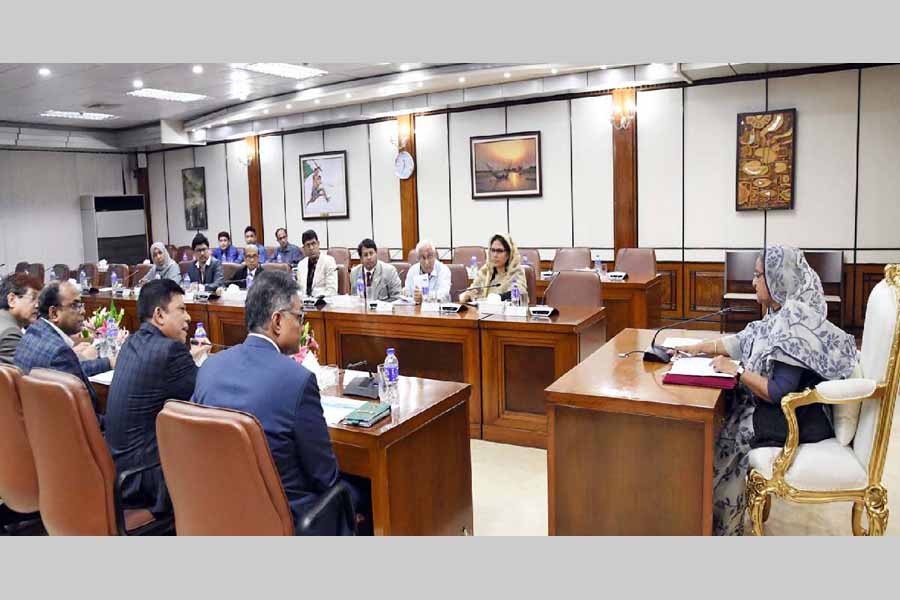 Putting emphasis on undertaking integrated development plans, Prime Minister Sheikh Hasina on Sunday said the development works should be complementary to each other.

"…a development work should be complementary to each other," said the Prime Minister.

She said it while witnessing a power-point presentation on Hatirjheel part realignment of Sonargaon-Buet Link under Dhaka Elevated Expressway PPP Project at the Prime Minister’s Office.

The PM gave her consent to the new alignment of the Sonargaon-Buet Link under Dhaka Elevated Expressway PPP Project witnessing the presentation, reports UNB.

Sheikh Hasina also gave some other directives over the construction of nearly 20-kilometre main expressway from Hazrat Shahjalal International Airport to Dhaka-Chattogram Highway (Kutubkhali) via Kuril-Banani-Mohakhali-Tejgaon-Moghbazar-Kamalapur-Sayedabad-Jatrabari.

The residents of Old Dhaka and Dhanmondhi will be benefited from the link road as some 20 per cent vehicles are expected to enter through it.

Stressing the need for protecting Hatijheel and other water bodies, the Prime Minister said once there had been a large jheel ( (water body) at Motijheel, but Pakistani ruler Ayub Khan destroyed it.

Sheikh Hasina said her government is taking initiatives to enhance facilities in the villages of the country.

Noting that the rural economy is improving, she said, “Jobs are being created in villages. So, the trend of migration to urban areas is declining.”

The Dhaka Elevated Expressway PPP project is being implemented in three phases involving Tk 89.40 billion.  The main expressway is being constructed over the railway from the airport to Kamalapur.

As per the old alignment, the link was supposed to connect the main expressway going through the middle of the Hatirjheel Lake and Panthakunja.

The progress of implementation of the first-phase work from Hazrat Shahjahal International Airport to Banani is 55 per cent, while the overall progress of the project work is 18 per cent.

Earlier, the Prime Minister witnessed another presentation on the revised design of a building under Joyeeta Tower Construction Project at her office.

The prime minister gave necessary directives to the authorities concerned over the design.