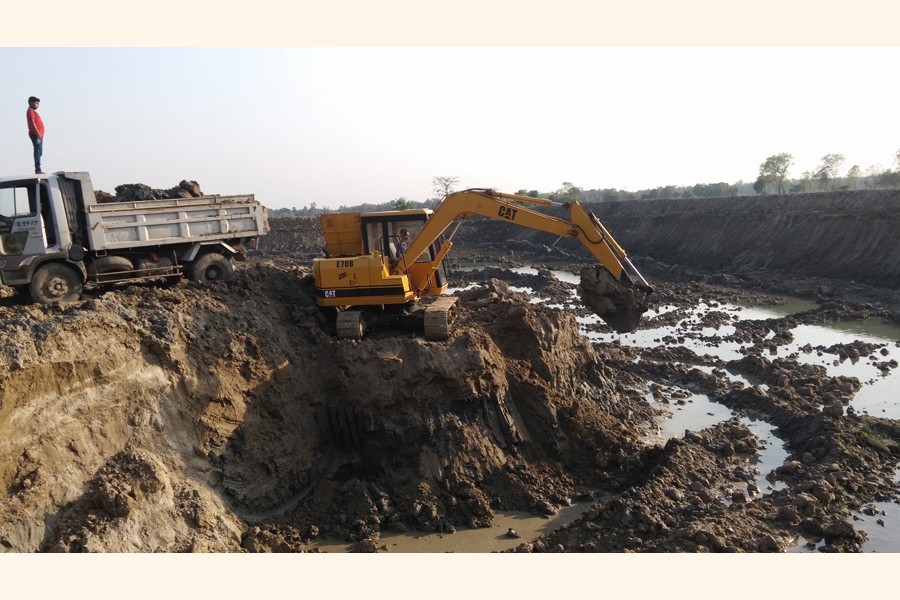 Topsoil being extracted by using a dredger illegally from a crop field in Rajbari. The practice is causing irrevocable harm to the district's agriculture for the past several years. — FE Photo

FARIDPUR, July 01: Unabated sale of topsoil from the crop fields has become a commonplace in Rajbari district for the past several years, much to the deterrent to agricultural production.

Due to silt accumulation and soil fertility, production of all types of crops is good in the district, which has a name of agriculturally famous region.

Cropland is declining day by day due to rampant sale of earth form the surface of fields in the greed for making money.

This topsoil is bought to be used in brick kilns and for fencing fish enclosures and ponds.

Sale of the topsoil on various pretexts is causing depletion of cropland, which is ultimately shrinking agricultural production in the region.

That is why agricultural economy of the region including Rajbari district is facing challenges.

These brick kilns have requirement of a large quantity of soil every day to manufacture bricks.

Owners of the brick kilns and people concerned buy topsoil from the crop fields in different ways.

On the other hand, some people fill holes in their houses with this soil.

Consequently, arable land is declining and crop production is being hampered for cutting and selling of the soil.

Soil is seen to be sold in different ways from crop fields of almost every union including Baktarpur, Khankhanapur, Chandani, Ramkantpur, Basantapur and Sultanpur of Dadshi union of Sadar upazila. The land owners are selling the soil at the price ranging from Tk 150 to Tk 1000 per decimal.

Excavator owners also get a portion of profit for cutting the soil.

The land owners of Choto Vakla said they were selling land to various brick kilns and home owners for fish farming as they did not earn much profit in crop cultivation.

They said it was not causing any damage to the cropland.

On the other hand, other land owners said their farmland is under threat for sale of soil from nearby fields.

They said if sale of soil form cropland continues unabated this way, production of crops in Rajbari would be severely hampered and they would incur huge losses.

Again in many places it has been seen that dredgers are being used illegally to sell soil from the sides of the crop fields.

As a result, the adjoining crop fields are being seriously affected.

They cannot say anything to the owners of these dredgers as they are influential.

The victims said it was of no use to file a complaint against them.

Sadar Upazila Agriculture Extension Officer Md Bahauddin said as there is no strong land policy in the country many people are making fish enclosures and ponds using this soil.

He appealed to the administration and the conscious citizens to come forward to protect the agricultural land.

It needs to be protected to make future generations and agriculture more profitable and to save agriculture.

Gopal Krishna Das, deputy director, Department of Agricultural Extension, Rajbari, said due to sale of fertile topsoil, cultivable land is declining and production is being hampered.

However, he said he would try to stop sale of cropland through discussion with the administration.

Dilsad Begum, deputy commissioner of Rajbari, said fertile soil of the land should be used for crop production and not for any other purpose.

She added they did not receive any complaint that crop land was being destroyed in this way.