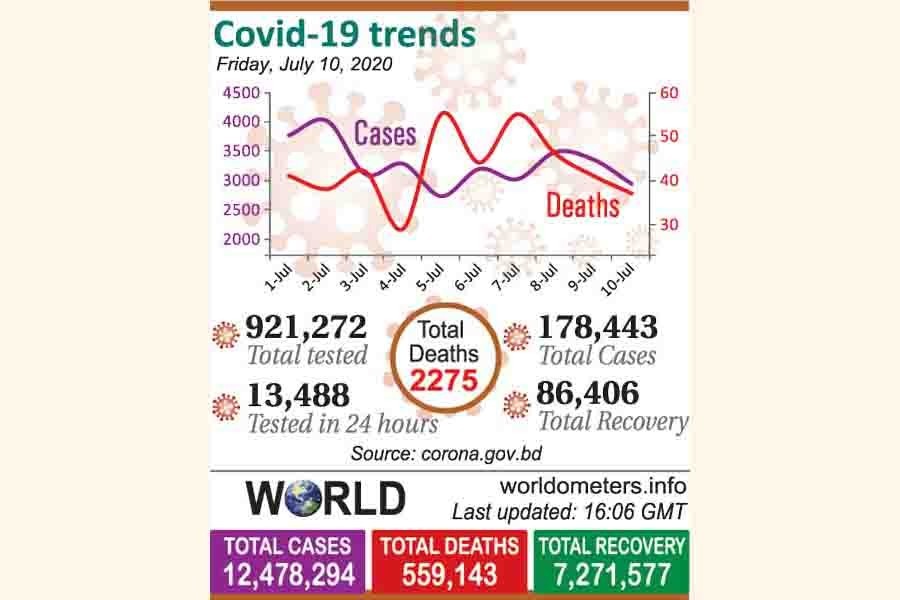 However, knowledgeable circles attribute the decline in number of tests, partially, to shortage of test kits.

In terms of coverage of Covid-19 tests, Bangladesh is the second worst performer in the sub-continent, after Afghanistan.

The ongoing downward trend in the number of tests will not help the authorities understand the real pandemic scenario in the country, healthcare professionals said.

To 'discourage unnecessary' tests, the government started taking charges, ranging from Tk 200 to Tk 500 each, from June 30, ignoring concerns of many professionals. Since then, a downward trend in the number of tests has been observed.

A total of 170,238 tests were done in the last 11 days after the imposition of fees, while the number was 182,504 in the previous 11 days, according to the data available with the state-run Directorate General of Health Services (DGHS).

As a result, the number of confirmed cases is also going down. A total of 36,636 people were tested positive in the post-fee eleven days, against 39,514 infections recorded in the previous 11 days.

Dr Rashid-e-Mahbub, former president of Bangladesh Medical Association (BMA), expressed his dissatisfaction over the fall in number of tests, saying that it will not let the policymakers understand the actual pandemic situation.

Criticising the government's fee imposition, he said the experts had warned the government that it could discourage people to go through the clinical screening, as the pandemic has already affected people's financial conditions.

Meanwhile, 13,488 tests were done with 2,949 new cases registered in the last 24 hours ending on Friday morning.

Of the tests, some 2,949 samples were found Covid-19 positive along with 37 more deaths during the period. With the tests, a total of 918,272 samples have so far been tested across the country.

"With these numbers, the overall tally of confirmed cases and deaths rose to 178,443 and 2,275 respectively," she added.

The DGHS sources said 63,537 people are now in both home and institutional quarantines, while 17,192 others are in isolation.

Simultaneously, some 1,862 people recovered from the respiratory disease, taking the overall number of recovery to 86,406, according to them.

Globally, over 12.4 million people have been infected by the novel coronavirus, and 558,188 of them have died until Friday 6:45 pm, according to Worldometer info.