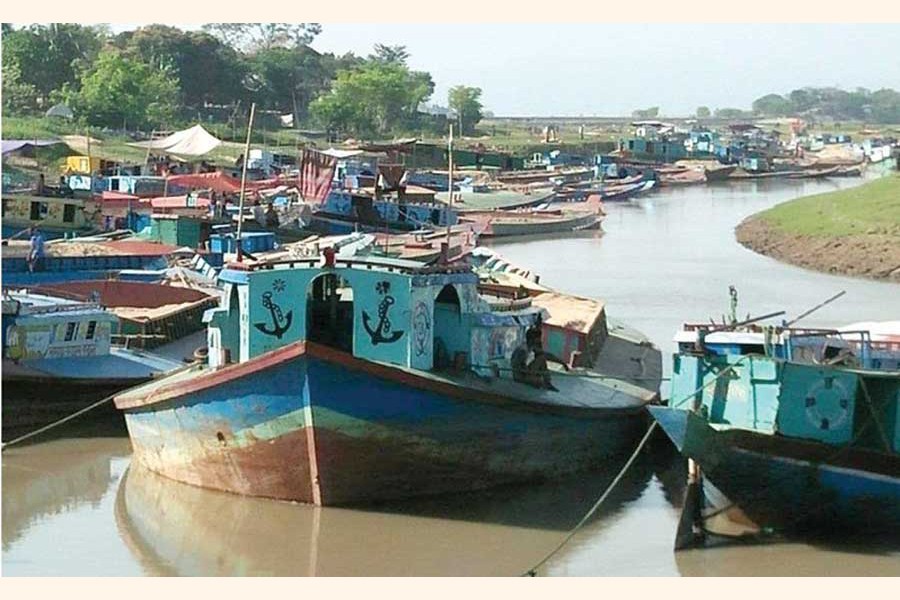 SYLHET, Feb 20: Drastic fall in the water level on the small rivers in Sylhet division, especially on the lower region of Sunamagnj and Habiganj, has caused severe congestion of small vessels, used for transporting coal and other goods from the border to remote areas, for the last few weeks.

Sources said the situation got much difficult as the carriers, loaded with imported coal for brick kilns got stranded at places.

Coal imported from India through Barchhara-Charagaon and Bagli Land Custom stations on Sunamganj-Meghalaya border are sent through these small and steel-body vessels to remote areas as well as to other districts. But during the winter things get more difficult.

Hundreds of vessels got stranded for days, informed some locals this afternoon.

The situation has been prevailing for over two weeks on the 5.0 km stretch from Hashmara beel to Paikortola of the Patai river under Tahirpur upazila.

Twenty steel-body vessels were trying to go out from the area while new 30 to 35 others join the queue.

Due to lower cost and safe mode, these vessels transport coal, cement and other materials to distant places like Narayanganj, Faridpur, Cumilla, Brahmanbaria, Tangail and Sirajganj.

A number of locals informed today over 500 vessels were seen stranded on the waterway. They said the boat people have to suffer since the mid-February to mid-April almost every year. But things had become more troublesome in recent years.

Intervention by the lawmen, especially the police and BGB could at least help easing the haphazard situation, the locals said further.

Mohsin Mia of Nuhan Nou Paribahan said, "We have to spend over a week in place of three days to reach Bhairab from Tahirpur now. It would raise the transport cost. We may have to stop transportation altogether", he added.

Dakshin Sripur Union Parishad chairman Biswajit Sarker said the congestion has become more severe over the last week. We have formed a committee for maintaining the law and order in the area, he added, no extraction of tolls from the vessels had been ensured.

Upazila Nirbahi Officer of Tahirpur Bijen Banerjee said severe siltation on the rivers had caused the problem for the last few years. Dredging could help ease the situation, he added.