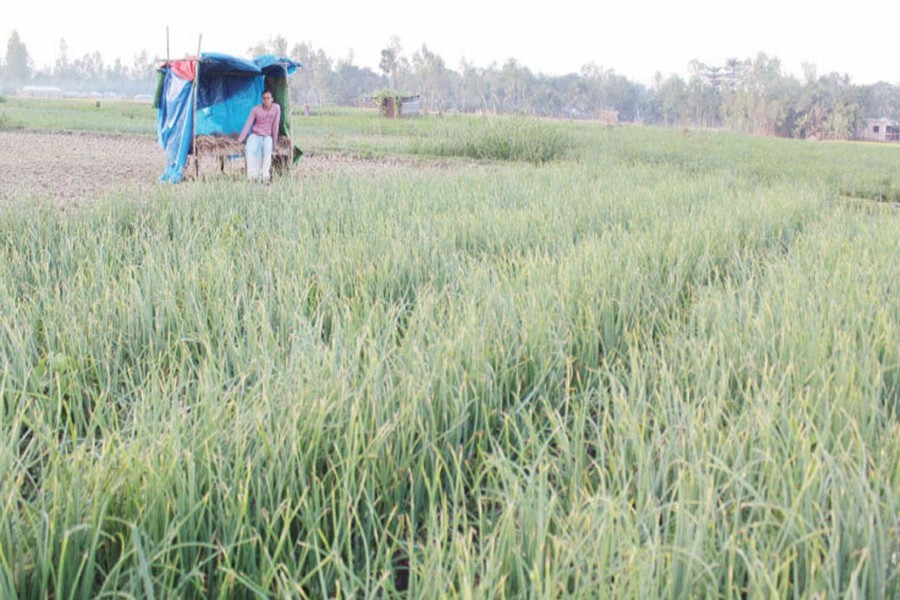 Due to the prolonged price hike, immature onion is being stolen from fields in Bogura, Sirajganj, Pabna and Joypurhat districts.

The farmers are defying acute cold wave at night to guard crops, according to the suggestion of Department of Agriculture Extension (DAE) to stop the theft.

They have also made temporary houses near the field to save the spice across the area.

Besides, the farmers are harvesting the immature onion from their field hoping for a good profit thought the DAE official advised to keep the spice in their filed minimum 20 to 30 days to get matured.

According DAE office of Bogura, district the farmers have cultivated over 700 hectares 'murikata' onion in their field in the first week of October. If the farmers harvest the spice in the last week of January, it would give a good yield, DAE added.

Farmer Yasin Barri Madhighalkandi village of Jorgachha union of the upazila lamented that his two decimal of immature onion had been stolen at night.

He said that like every year, he planted onions on four decimal of land in the field spending Tk 2,000 in last October aiming to make a good profit. Abdul Ghafoor, a local UP member, said that he had never heard of the theft of onions from the field before. This time the price of onion has increased in the market.

Officer-in-charge of Sonatola police station Abdullah Al Masud Chowdhury said he has heard abiut the theft from people. If a written complaint is received, action will be taken, the OC added.

Deputy Director (DD) of DAE Abul Kashem said, "We are suggesting the farmers to guard their crops at night."

DD Meftahul Bari in Joypurhat district said the farmers of all five upazilas like Khetlal, Pachbibi, Kalai, Akkelpur and sadar have cultivated 'murikata' onion on 401 hectares of land this season.

To get good profit, the farmers are harvesting immature onion from their filed. On the other hand there has been incidents of theft as the price of the spice is still high in the retail market. Each kg of the spice is sold at Tk 200 to Tk 220.

After harvesting the murikata onion they will bring some 910 hectares of land under sapling onion this season.

DD Md Habibur Rahman in Sirajganj district said the farmers of the region have cultivated 'murikata' onion in the Jamuna river basin on 500 hectares of land after recession of water. Farmers are taking preparation to harvest the spice in next couple of weeks but the spice is being stolen from the field.

DD in Pabna district Md Azaher said due to price spiral incident of theft is occurring across the region. The farmers have been made conscious to save the spice filed from theft, DD added.

Jasim Uddin Museum yet to be fully open