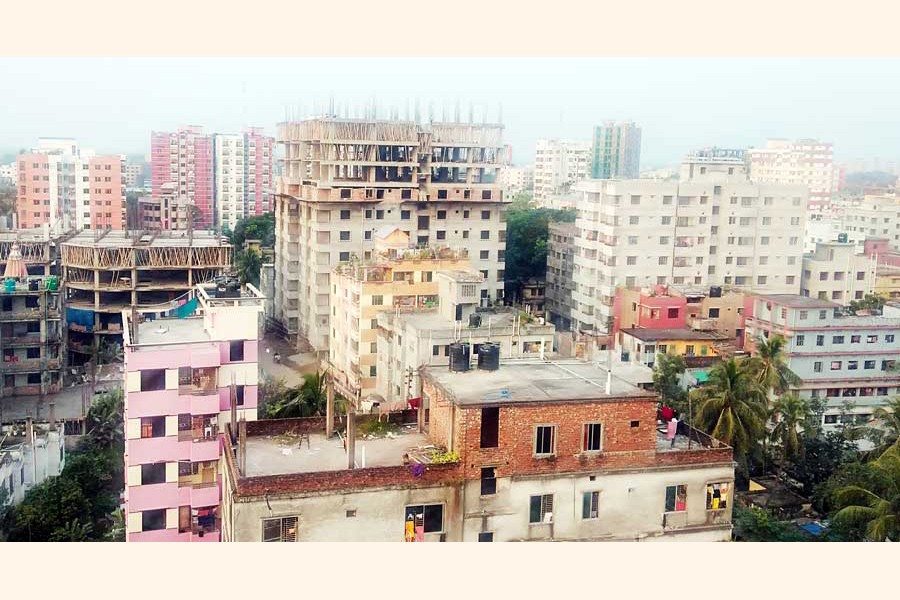 A top view of the Cumilla city — FE Photo

CUMILLA, Jan 23: Nearly 700 high-rise buildings have been constructed in Cumilla city in an unplanned way and without following the building code.

Cumilla City Mayor Monirul Haque Sakku said action will be taken soon against the owners of these unauthorised buildings.

Sources said, of these 690 buildings were constructed without the approval of the city corporation. The entire city is at risk of fire and natural disasters due to these unplanned buildings.

According to the information from Cumilla City Corporation's Engineering Department, 495 buildings currently under construction in Cumilla city without any approved design.

And some 195 buildings are unauthorised. In addition, there are 95 more buildings that are old and risky.

The City Corporation Standing Committee recommended the construction of the ninth floor of Shikder Anwara Castle. But the corporation did not provide the design, however, because it did not submit the fire service, Environment Department exemption and civil aviation papers. The corporation did not even allow them to construct buildings. Many such high-rise buildings are being constructed without approval.

According to sources, a worker was killed and 14 were injured when a building under construction called Delaware Rupayan Towers collapsed on December 27 in Kandirpar of the city. The authorities formed a four-member inquiry committee on the incident. They are currently investigating the documents of the building.

Head of the investigation committee, Additional District Magistrate Pintu Beppari of Cumilla said the building was being built on government land.

Earlier on that land, there was a restaurant and a movie hall called Deepika.

Cumilla City Mayor Monirul Haque Sakku said the owner of the Delaware Rupayon building had the land leased for 99 years from the Ministry of Land in 1962. Later, the owner appealed for the construction of the land near the then Cumilla municipality.