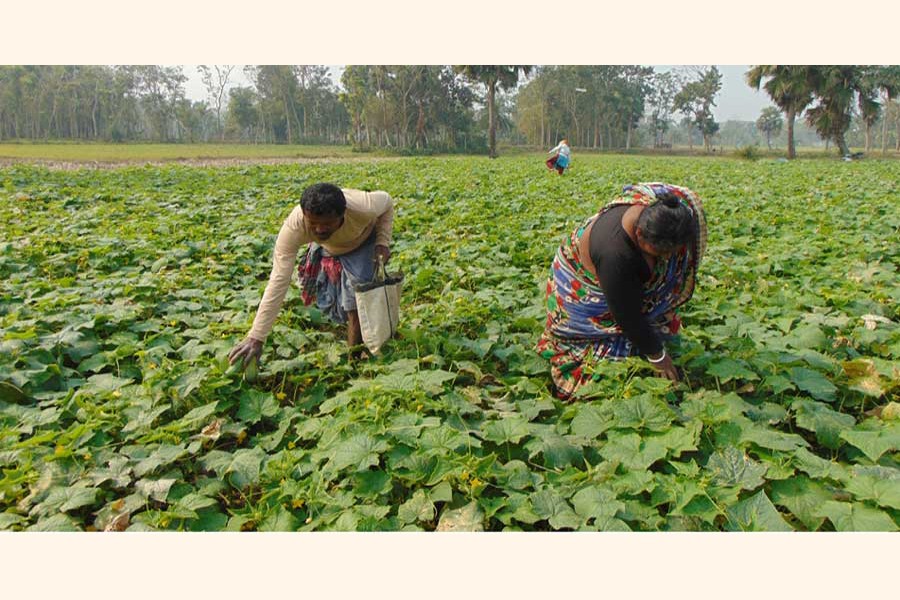 KHULNA, Feb 27: There has been a revolution in the cultivation of vegetables using organic method in Betaga union of Fakirhat upazila under Bagerhat district.

Sources said, a good number of farmers are being benefited from the organic cultivation of cucumber (khirai) on 50 acres of land in the union.

Farmers are producing bumper yields with the regular supervision, advice and supply of various agricultural materials from upazila agriculture office.

At present, 100 acres of land is producing poison-free vegetables without chemical fertilisers and pesticides.

For this purpose, 'Organic Betaga Polli' has been developed.

In the meantime, these organic farmers have gained a great reputation across the country by producing and harvesting safe vegetables.

Demand for the locally-produced items. Traders from Dhaka, Chattogram, Khulna and other district visit the area and purchase cucumber from the local markets.

UP member and union president of the Standing Committee on Agriculture, Fisheries and Animal Resources Yunus Ali Sheikh said a special market place called 'Organic Betaga Vegetable Market' has been set up for the organic Betaga products. BADC has built the market on 13 decimals of land at a cost of Tk 1.8 million.

This year more than a hundred farmers has grown organic cucumber. The farmers are happy because the yield is good. Cucumber farmer Tariqul Islam of Maskata village, has cultivated cucumber in his 50 decimals of land this time. This year, the yield has been better than other years.

He said that in the first week of the month of Agrahyan, he planted seeds and irrigated the land multiple times after the plants were grown. Vermicompost, organic fertiliser made mainly of cow dung and earthworm, is used the root of the plant and pouring water there.

Many local farmers have shown their keen interest in cucumber cultivation in the hope of gaining more at a lower cost.

Farmer Debatosh Das and his wife Ambika Rani Das cultivate cucumber on their own 50 decimals of land. They are very happy with the yield.

Altaf Hossain, a farmer of Organic Betaga, said he planted cucumber on his 25 decimals of land. Although the price around Tk 20 to Tk 25 per kg "I have got good profit by selling the item. The cultivation cost came down as I have not used any chemical fertiliser or pesticide on my cucumber beds."

Upazila Parishad Chairman and Local Government Specialist Swapan Das said, "Although we can achieve food security, we are far behind in producing and marketing safe food."

Therefore, we have received a number of action plans from the upazila administration to ensure safe food production in whole the upazilas like Organic Betaga, which he hoped would be implemented soon.

Deputy Assistant Agriculture Officer, Prodip Kumar Mondal and Upazila Agriculture Officer, Nasrul Millat, said that more than 100 farmers of Organic Betaga grow cucumber along with other crops every year. We distribute sex pheromone traps, orgaic fertilisers, seeds and other materials for the eradication of insects, in addition to the suggestions of all those farmers.

Ten organic fertiliser houses have been built, with which to produce at least 150 tonnes of manure twice a year. These are distributed among the local farmers.