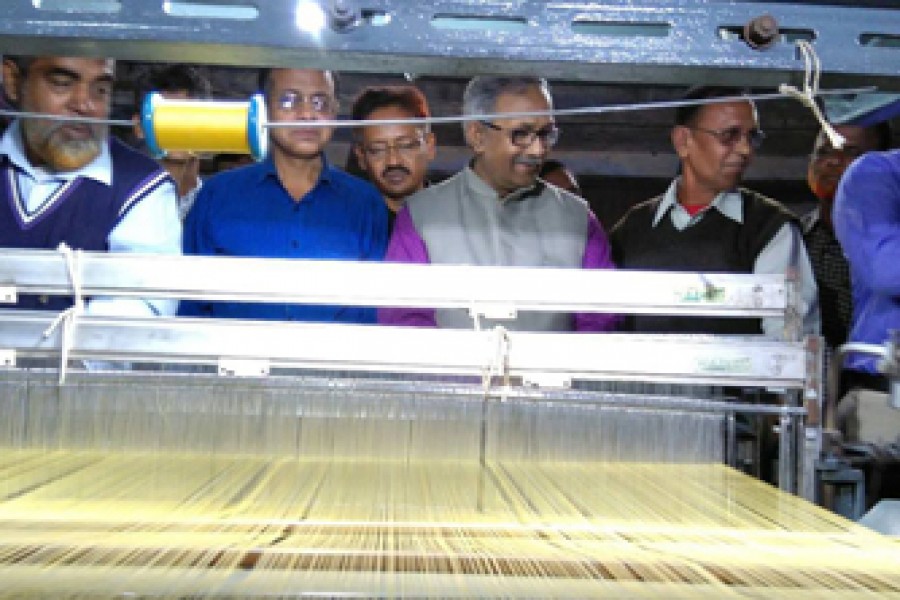 The industrial estate of Bangladesh Small and Cottage Industries Corporation (BSCIC) in Rajshahi generated employment scopes of more than 10,000 people so far in various trades till last October.

The people got the jobs in various fields like enterprise development, skill development and training, industry ownership transfer and establishment of new industries.

Employment for around 6,500 people is expected to be generated in the next five years, said Tamanna Rahman, deputy general manager of BSCIC.

Around 1,250 entrepreneurs were given necessary supports of getting industrial loan worth around Taka 76.86 crore. Registration was given to 261 industries. Investment worth around Taka 27.50 crore has been achieved in 43 industries through ownership transfer.

In the current 2019-2020 fiscal year, the BSCIC has set a target to identify 333 entrepreneurs, impart entrepreneurship development training to 210 people, credit support to 147 others and employment generation for 1,325 people.

The 325-plot BSCIC industrial estate, established in 1961 on 95.71 acres on the city’s outskirts, has been providing electricity, water supply, security, road and drainage facilities to the entrepreneurs for running their business.

Several silk-clothes manufacturing units earned reputation for their quality products. They expect that there would be no more sick industry in the estate, the officials said.

Terming the BSCIC industrial area viable for any small and medium industry, Liakat Ali, president of Bangladesh Silk Industries Owners Association, said the entrepreneurs are making a profit and demanding uninterrupted power and gas supply to the BSCIC for reducing production costs.

Meanwhile, development works of the second industrial estate of BSCIC are progressing aimed at generating employment opportunities for more than 5,000 people in Rajshahi.

The estate being developed on 50 acres of land at Parila area will also help flourishing industrial sector in the city and its outskirts.

The development works are being implemented under a project titled “Rajshahi BSCIC Industrial Estate-2” involving around Taka 131.74 crore since July, 2015.

BSCIC, Rajshahi Regional Office has been implementing the project setting a target of developing 296 plots for accommodating 250 industrial units coupled with generating the employment opportunities.

Tamanna Rahman said the government has taken the decision of providing industrial plots to the actual entrepreneurs as per the necessity. Under the project, there will be three types of plots. The number of A-type industrial

The industrial plots will be developed considering the country’s socio-economic condition and future necessity as the entrepreneurs are expanding the SME gradually in the region, she added, reports BSS.

Youth stabbed to death in Cumilla