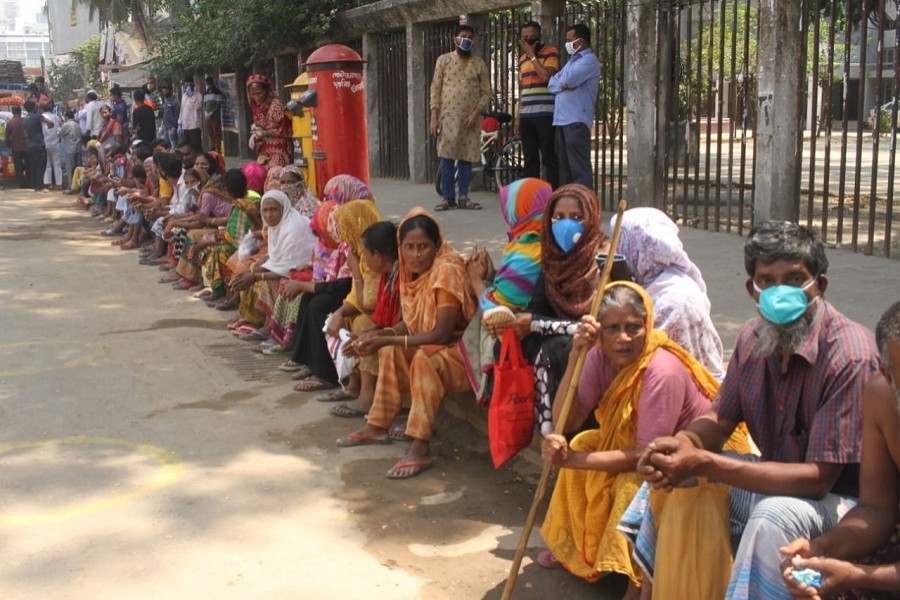 Low-income people waiting to collect relief materials amid a coronavirus shutdown in the country. — UNB Photo

For many like Abul Kalam, a rickshaw-puller in the capital city for over three decades, Dhaka is now a ghostlike place as it has fallen silent amid the coronavirus scare, UNB reports.

Kalam, 67, says he has never seen Dhaka so desolate.

"Suddenly I'm in big trouble. It's a good decision that we all must stay at home to protect ourselves. But what option do you have if you're hungry," Kalam, father of three daughters and one son, told the news agency regretting that he had to violate the government's instruction of staying at home.

Thousands of rickshaw-pullers live in Dhaka and surrounding areas but the majority of them left the capital after the government announced a general holiday from March 26.

"I think most of the rickshaw-pullers left for their respective villages," said Kalam hailing from Zinjira, Keraniganj.

The government has already taken an initiative to provide food assistance to those who live hand to mouth.

Asked whether he availed of free food support from any source, Kalam said, "I rushed to Dhanmodi 8. But food distribution got over for the day before that. I didn't wait but looked for a passenger."

The rickshaw-puller tried to console himself saying, "All are not equally lucky to have such free food support. May be there was nothing for me for the day."

Kalam looked up in the sky and kept taking forward the human-powered-transport passing Central Hospital as his destination is Malibagh.

"For the first time I got a long-distance passenger with Tk 80 in the last one week. Passengers are offering less citing traffic-free roads. And most of the trips are short," he said.

When the rickshaw-puller, carrying this correspondent as his passenger, crossed Elephant Road, he pointed at a small group of young people who were smoking at that time.

"Look at them. They came out from home for no reason. While people like me had to come out to feed family. These people must stay home," said the rickshaw-puller who looks well aware about the situation.

Kalam faced barriers from numerous points in the city from the on-duty police officials who are encouraging people to stay at home instead of roaming around in the city without any emergency.

"They (police) are doing a very good job. It's their duty. We all need to help each other. I’ll go back home once I get enough income to survive for the day," he said.

The general holiday announced by the government to slow the transmission of COVID-19 has been extended till April 11.

Kalam is little bothered about the extension and said, "It is important to save people of our country. I pray for the people of the whole world."

After reaching Malibagh rail gate, Kalam gave a big smile and confidently said, "This coronavirus won’t be able to harm us. We’re so blessed."

From the evidence so far, the COVID-19 virus can be transmitted in all areas, including areas with hot and humid weather, according to the World Health Organization (WHO).

Regardless of climate, adopt protective measures if you live in, or travel to an area reporting COVID-19, it advised.

"The best way to protect yourself against COVID-19 is by frequently cleaning your hands. By doing this you eliminate viruses that may be on your hands and avoid infection that could occur by then touching your eyes, mouth, and nose," the WHO said.

Bangladesh on Wednesday confirmed another death due to coronavirus taking the total death to six.

Meanwhile, two more people tested positive for coronavirus in the last 24 hours, raising the total number of cases in the country to 56, the government announced Thursday.

Australia plans another chartered flight for its citizens on June 10