Farmers need large amount of loans from banks to offset the effect, say experts and officials 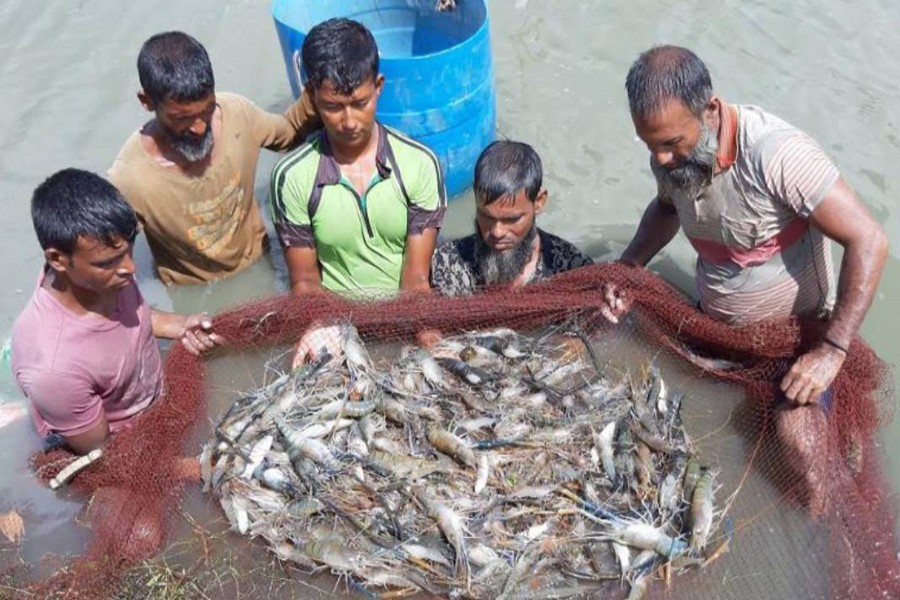 Changing climate has started to take its toll on Bangladeshi shrimp farmers. Shrimp farmers in southern district of the South Asian country, which lies in the tropical zone of Earth, have been bearing the brunt of climate change effects for a notable time, besides some other existing problems, including shortage of fries and a lack of access to bank loans.

Shrimp farmers in the country's coastal region are facing a hard time as a lion's share of fries perish in shallow water before being mature because of the changing global climate, experts, farmers and government officials have said.

Fries get affected with virus two to three months after they are released in shrimp enclosures (Gher, as called by locals).

The fries get infected with virus as they can't bear excessive heat of sun during summer season, the prime time of shrimp farming, farmers and fisheries officials noted.

They said water in most of the shrimp enclosures in the southern districts are not deep from top to bottom.

"Water in many gher is not as deep as need to be (for shrimp farming) with a staggering number of the gher having only a short distance from the top to the bottom," said the farmers.

Ram Krishna Joardar, a shrimp farmer at Shatkhira district, told the FE that they are facing the problem (low depth in water level) for the last four to five years.

"We are facing this problem for four to five year and local fisheries office suggested farmers to dig ghrer from the water surface to the bottom up to 2.5-3.0 feet," he informed.

The fisheries department has suggested the farmers that digging deep from surface to down will help shrimp fries survive in summer sunlight.

The required depth (in water) will allow fries to move with ease and swim downward to save themselves from the scorching sunlight in summer, they stated.

However, small and marginal farmers don't have resources or financial strength required to act according to the suggestions given by the fisheries officials, experts said.

Digging enclosures 2.5 to 3.0 deep will increase farming cost, said farmer Joardar. He said additional manpower and soil digging machine will be required to dig down the gher up to that depth and it will multiply the farming cost.

He urged the government to extend financial support to the farmers to face the challenges and overcome the crisis.

Currently, farmers can get only Tk 10,000 against one 'bigha' of land as loan from local banks which is not sufficient to overcome the increasing farming cost and offset the affect of climate change, both officials said farmers said.

A couple of years ago, farmers could collect shrimp fries from the local water bodies like rivers, but now farmers have to depend fully on import and other sources to get fries that involve an additional expenditure, they pointed out.

Pavel Partha, an independent researcher who is working in the coastal region, echoed them. He said frequent cyclone strike in the coastal area grievously harm forests. Storm or tidal bore not only damage Sundarbans, the largest mangrove forest, but also uproot both big and small-sized trees around shrimp farming areas.

Shade of trees not only helps animals, flora and fauna grow but also increases shrimp production, he said. He also said that excess shrimp catching from natural sources is also to blame for scarcity of shrimp fries.

Farmers and fisheries officials from across the country took part in workshop at Matsha Bhaban in the capital on November 20 where they also discussed these issues and possible way out of the crisis.

Non-availability of big loans from banks is one of major obstacle for the marginal farmers as the financial assistance is necessary to address the new challenges, including climate change impact, she said.

Insufficient shrimp fries supply also creating big problems for the marginal farmers apart from scarcity of healthy shrimp fries at both government's and other sources.

Satkhira district fisheries officer Md Moshiur Rahman told the FE they are collecting data at field level to find out ways for addressing the climate change effects on shrimp farming.

"We need to avoid old mode of shrimp culture and bring about a change to the system because of the global warming. We are collecting data and talking to farmers and after examining all these in the lab we will take the next course of action," he said.

Representatives from local administration discussed with the government and private bank officials in the last week of November about the need to provide larger amount of loans to shrimp farmers so that they can meet the additional costs of farming, he added.

Experts said, shrimp farming is considered as 'white gold' in Bangladesh because of its prospect to earn huge foreign currency. But for the last few years the country has been facing various challenges including frequent cyclone hit and rising temperature that badly impact shrimp breeding in natural way.

Around one month back, cyclone Bulbul washed away fishes worth Tk 100 million in Shatkhira district, and over 4,500 trees were razed to the ground in Sundarbans. Before that, about two months ago, a large quantity of shrimp died due to oxygen failure worth around Tk 250 million, caused of heavy rainfall in neighbouring district Bagerhat.