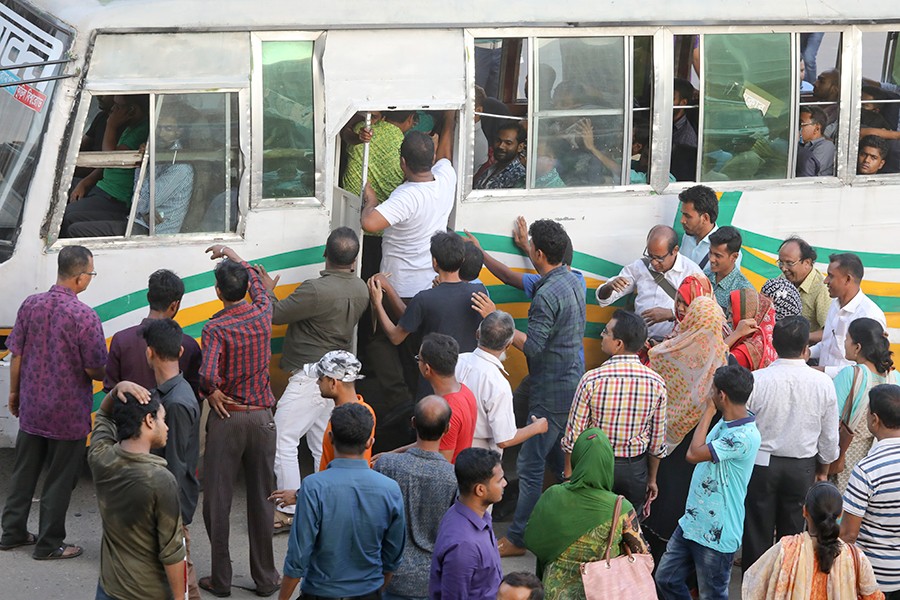 Public buses running in the capital would gradually be brought under counter-based ticketing system to stop operating such transport on contract basis, transport owners decided on Wednesday.

The system will be introduced soon on two routes -- Basila to Motijheel and Mirpur to Motijheel -- on experimental basis, they said.

Terming drug addiction of drivers a key reason behind road accidents, the transport owners announced that a dope test programme would be launched in different points of the city on December 1 to detect drug abuse by the drivers.

The decisions came at a meeting titled 'Bringing discipline in public transport and curbing road accident in the capital' organised by the Dhaka Road Transport Owners' Association at the Institution of Engineers, Bangladesh (IEB) in the city.

Khandaker Enayet Ullah, general secretary of the association, said, "As a test case, we are going to introduce counter-based ticketing system for buses on two routes - Basila to Motijheel and Mirpur to Motijheel -- to stop contractual operation of public buses."

However, he said, parking bays are required to be constructed in different places to implement such system and prevent passengers from getting on and off buses anywhere on the city streets.

Mr Enayet also said he held meetings with the mayors of two Dhaka city corporations to identify sites for the construction of parking bays where tickets of all buses will be available in one counter.

Mentioning that at least 40 to 50 per cent of drivers are drug addicts, he said, "From December 1, a special programme will be launched to detect drug abuse among drivers through mobile court drives in different points of the city."

If any drivers fail the dope test, they will be sent to jail directly, he added.

He sought cooperation from the Bangladesh Road Transport Authority (BRTA) and the police department to launch the programme.

He also said meetings were held with Bangladesh Road Transport Workers Federation executive president Shajahan Khan to stop extortion in the transport sector, but to no avail.