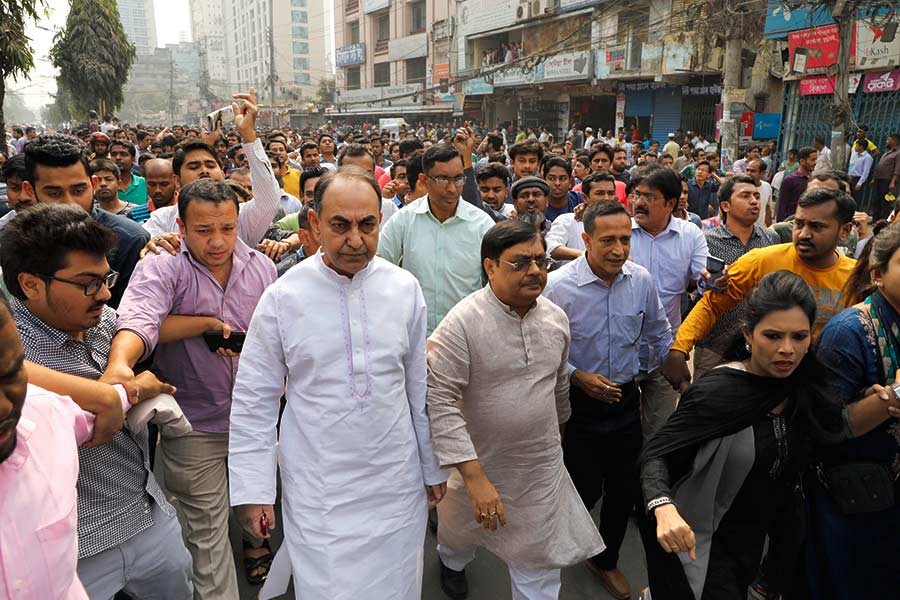 Senior leaders of BNP have defended their current strategy to gain public sympathy while not losing the party's strength.

About maintaining a soft line of action after the court verdict against Khaleda Zia, they say that they cannot have the party image tarnished ahead of the next general election.

Two senior leaders of BNP said their main plan is now to carry out a peaceful movement avoiding any type of confrontation with police or ruling party men.

This strategy would keep its rank and file in good mood and help prepare the party for the next general election, the leaders said.

They said their party will join the next polls under any circumstances, and they believe BNP will be able to 'return to power' if its leaders and activists can show their real strength.

A BNP policymaker, wishing anonymity, said they will do whatever necessary to ensure a fair election after the announcement of the election schedule.

"We will put up our all strength on the election day to ensure our victory," the leader said.

He also said they are circulating this particular message among their followers so that they refrain from responding to any provocation by the government.

Besides, he said, they are avoiding any type of fight to manifest that BNP can be run in a peaceful and disciplined manner under its acting chairman Tarique Rahman.

Party's Secretary General Mirza Fakhrul Islam Alamgir claimed the main motive behind convicting their chairperson is to keep her and BNP away from the next election.

"But it won't work. Our chairperson will come out of jail through legal process," Fakhrul said.

He said their party will carry out a peaceful and non-violent movement demanding the release of their chairperson Khaleda Zia alongside a legal battle at the apex court.

Fakhrul said the next election will surely be held under a non-party administration, and they will join it under Khaleda's leadership.

"Many common people also cried hearing the verdict. People are also appreciating our line of action. So, we will continue to do it," said.

Mosharraf, however, feared that the government may carry out some subversive incidents to blame BNP and mislead people.

"We are very careful about it, and we have also asked our party men to remain alert," Mosharraf said.

He, however, admitted that successful implementation of their strategies and targets  is surely a big challenge for their acting chairman Tarique Rahman.

"But our all senior leaders are sincerely cooperating with him to successfully face the situation. We'll work out plans in consultation with him and our secretary general will execute those," Mosharraf said.

The BNP leader said their senior leaders will also visit different districts to give the grassroots various directions, keep them in an upbeat mood and prepare for the next general election.

"So, we will continue a peaceful movement alongside getting ready for the next general election to ensure our party's return to power."

"We will once again probe the competent leadership of Tarique Rahman by making the party stronger further defying all odds and obstacles," he said.

"We hope she would be freed from jail very soon. Then we will fully prepare for the next polls," Rizvi added.