BNP leaders apologise to Khaleda for failure to wage movement 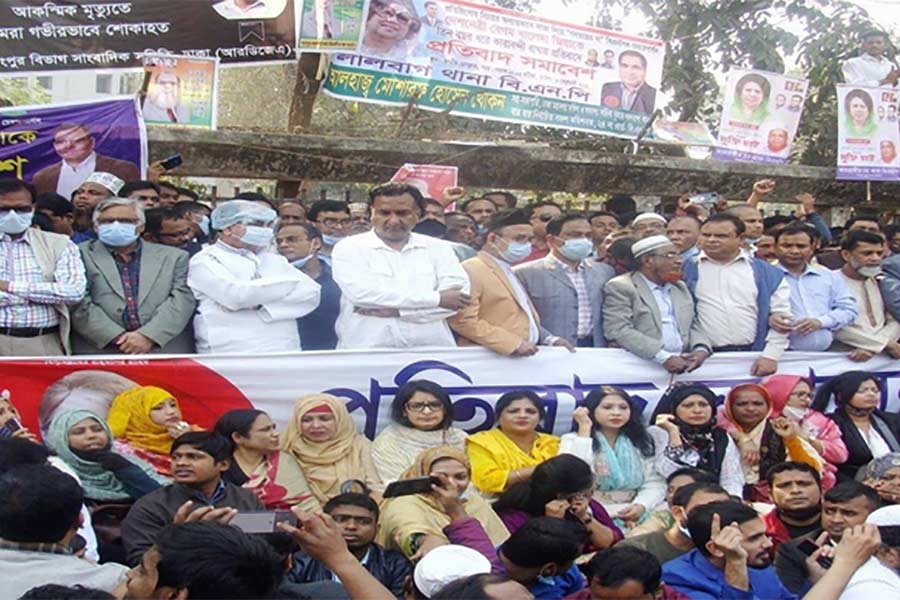 BNP senior leaders on Monday apologised to their party chairperson Khaleda Zia for their failure to wage a strong movement or take any step for her release from jail over the last three years.

They, however, vowed to take to the streets soon by organising their party rank and file to have Khaleda completely freed from jail, reports UNB.

"I humbly apologise to our imprisoned leader Begum Khaleda Zia and acting chairman Tarique Rahman as we’re so unfortunate and so unsuccessful that we’ve not been able to take any step to free them ,” said party standing committee member Mirza Abbas.

Speaking at a protest rally, he also said Khaleda Zia will not be there in jail for ever as their party’s movement will gradually intensify, paving the way for her release.

"We want to say firmly that we’ll take to the streets soon reorganising the party to completely free Begum Khaleda Zia from jail and bring Tarique Rahman back home," the BNP leader said.

As part of BNP’s countrywide programme, its Dhaka south and north city units jointly arranged the programme in front of the Jatiya Press Club, marking the third anniversary of the imprisonment of its Chairperson Khaleda Zia in a graft case.

BNP standing committee member Gayeshwar Chandra Roy said their party must wage a ‘war’ in a democratic manner to ‘restore’ democracy in the country.

“That war won’t be limited to only slogans. We’ll have to free Khaleda Zia through that war for the sake of the country and democracy. Her release will pave the way for the restoration of democracy,” he observed.

The BNP leader said their party should take a decision immediately on waging a strong anti-government movement. “We shouldn’t leave the streets until we succeed. We have to prove it not in words but in our actions. We must occupy the streets together with people so that the corrupt ruling party men can’t come out of their homes.”

He said making reckless remarks, and disrespecting and belittling people have become a disease of the ruling party leaders since they now do not need people’s votes. “So, as the followers of Ziaur Rahman, who introduced multi-party democracy, we must bring back people’s voting and other rights.”

Gayeshwar said the Election Commission has been working to appease the government instead of ensuring credible elections.

He said Khaleda Zia has now been under house arrest as the government kept her in her Gulshan house instead of custody to avert any untoward incident amid the coronavirus. “Even, Khaleda Zia now can’t meet her brother and sister. “

Several thousand leaders and activists of BNP joined the programme protesting her jailing three years back.

She was found guilty in another corruption case the same year, though her party claims both cases are politically motivated.

As the coronavirus hit the country, the government freed Khaleda Zia from jail for six months through an executive order suspending her sentences on March 25 last year.

On August 27, the government extended her release for six more months.