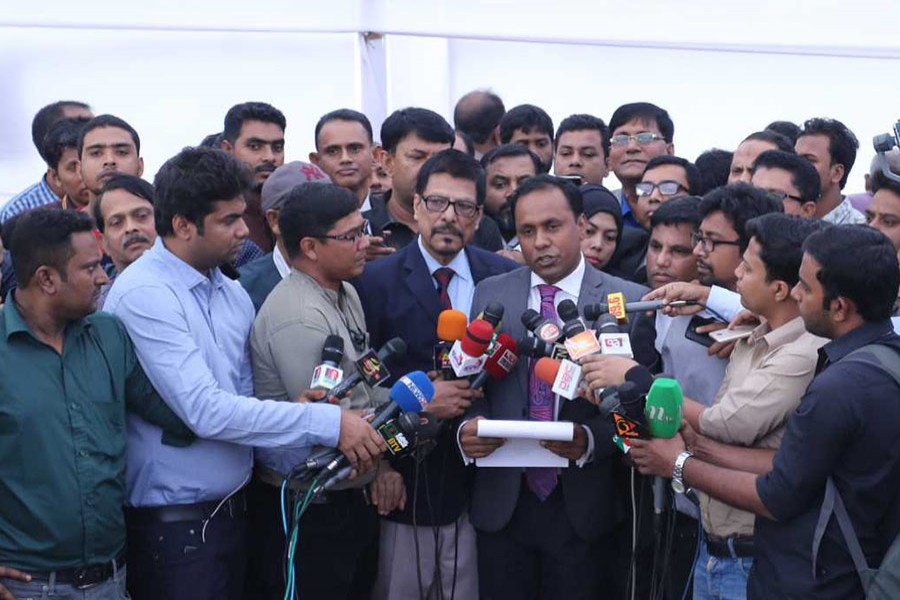 The lawyers of BNP chairperson Khaleda Zia talk to the reporters after filing appeals with the Election Commission against rejection of nomination papers of three constituencies on Wednesday, December 5, 2018. Photo: UNB

The lawyers of BNP chairperson Khaleda Zia on Wednesday have filed appeals with the Election Commission against rejection of her nomination papers of three constituencies.

On behalf of Khaleda Zia, Barrister Kaisar Kamal submitted the appeal for Feni-1 constituency while Barrister Nowshad Jamin for Bogura-6 and Advocate Masud Ahmed Talukder for Bogura-7 constituencies at Nirbachan Bhaban in the city.

"If the law runs on its own pace, and election commission will take its decision fairly... we hope the result of the appeals will be fair," Barrister Kaisar Kamal said.

Mentioning that the entire country and nation is now looking for a participatory election, he also said, "The election which will be held without Khaleda Zia will be an election of farce."

He added that they have full faith on the commission, adding "We hope the Election Commission will follow the law," he said.

Earlier, the Election Commission on Sunday (Dec 2) ditched Khaleda's all three nomination papers filed for contesting in polls from Feni-1, Bogura-6 and Bogura-7 seats for her conviction in two graft case.

On October 29, Khaleda was convicted and sentenced to seven years' rigorous imprisonment by a special court in Dhaka in Zia Charitable Trust corruption case, reports UNB.

Khaleda landed in jail after being sentenced to five years' imprisonment in Zia Orphanage Trust case by the same court on February 8. The High Court later on October 30 extended her jail terms in the case to 10 years.