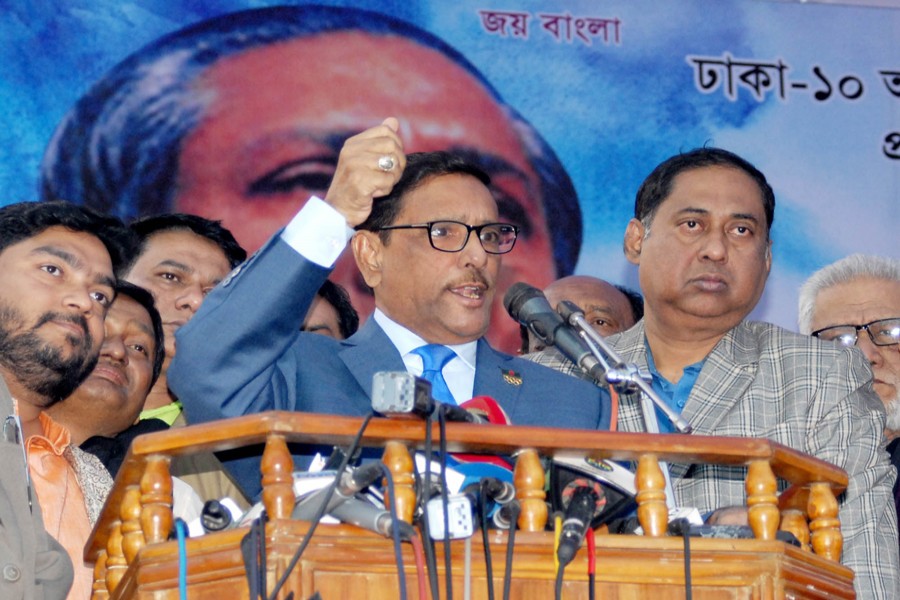 Awami League General Secretary Obaidul Quader speaking at the inaugural function of member collection and membership renewal programme of Awami League at the Bangabandhu Bhaban at Dhanmondi in the city on Monday. — Focus Bangla

Awami League General Secretary and Road Transport and Bridges Minister Obaidul Quader said on Monday none has to do anything to break BNP as negative politics of the party is enough to break itself, reports BSS.

"BNP has changed their constitution for protecting BNP chief Begum Khaleda Zia. As per the constitution of BNP, no corrupt person would be a member of the party," he told the inaugural function of member collection and membership renewal programme of Awami League at the Bangabandhu Bhaban at Dhanmondi in the city.

AL Office Secretary Dr Abdus Sobhan Golap, among others, was present at the programme with local lawmaker Sheikh Fazle Noor Taposh in the chair.

Quader said, "Awami League does not need to engage itself in any conspiracy to break BNP. It is in a good position. BNP is enough to break the party."

He said the people of the country will reject BNP as they are engaged in destructive and negative politics.

BNP has removed section 7 of their party's constitution to protect corrupt politicians, Quader said the exposure of Zia family's corruption has started burning up the BNP with mental agony.