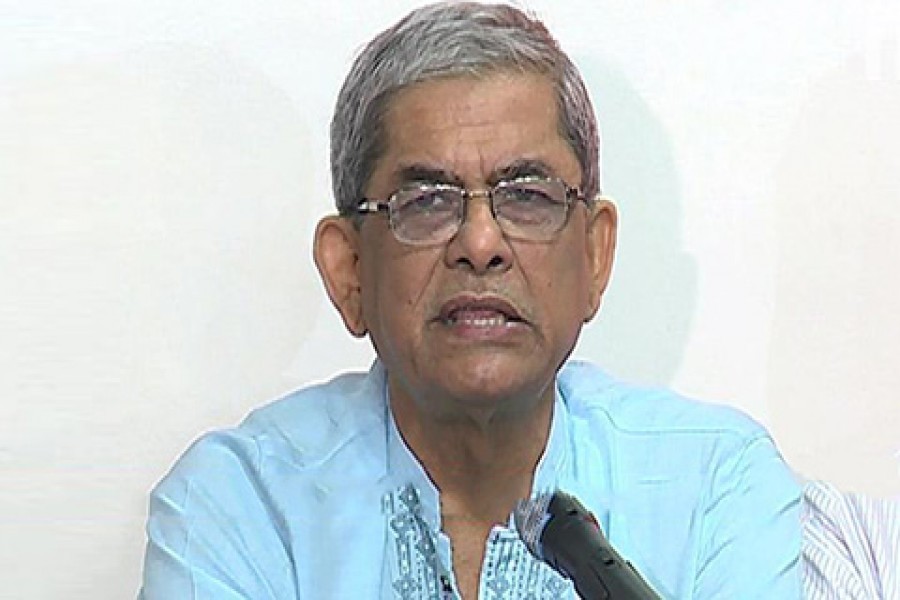 "When I go to court, I don't find any other people rather than our party's ones. Many of them aren't even our leaders. They're only our supporters but there're many cases against them," he said.

Speaking at a discussion, the BNP leader said their party leaders and followers have also been subjected to enforced disappearances, extrajudicial killings and various repressive acts, reports UNB.

"They (BNP followers) are being picked up and then either shot dead or maimed...The country where people remain satisfied with little things has been taken to an awful suffocating situation," he lamented

Jatiyatabadi Help Cell arranged the programme at Dhaka Reporters' Unity (DRU) to provide financial assistance to the family members of some victims of enforced disappearance.

Besides, 'Shaheed Nurul Alam Stipend' was given to the children of 15 families of those who were made disappeared, abducted and tortured during the rule of the current government.

Fakhrul hoped that the current situation will be over very soon. "I hope this darkness will be removed as people are waking up."

He also believes that the young people will come forward to bring back a truly democratic system ending the darkness within a very short time.

"Let's move forward towards that goal by forging unity and uniting people. We'll surely be able to establish the government of people by defeating the current authoritarian and fascist regime," the BNP leader said.

He warned that those who were involved in the enforced disappearances and unlawful killings will be put on trial someday. "Every person of the Awami League who are responsible for creating the horrible situation in the country will be identified and tried. People will bring them to justice."

Fakhrul said repressive and unlawful acts continue to happen in a country where there is no democracy. "So, we have to bring back democracy. We must get rid of this situation in the interest of the country and its people."

Pointing to the missing family members, the BNP secretary general said in an emotional voice that he feels guilty seeing the plight, mental trauma and financial hardship of them and their children. "There're families that are facing difficulties to pay for their children's education and treatment as we couldn't stand by their side in that way."

He urged their party leaders to take the issue seriously and create a special fund for bearing at least the education cost of the children of those who fell victims to enforced disappearance.

Some family members of the victims of enforced disappearance also spoke at the programme narrating the sufferings and ordeals they are going through losing their near and dear ones.