BNP appoints lobbying firm in US before elections 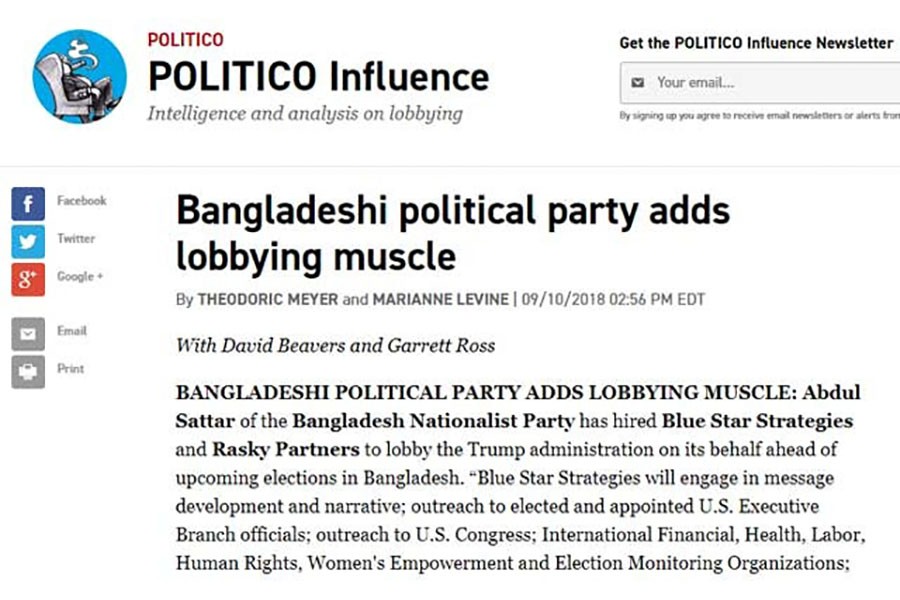 BNP has hired the services of a lobbying firm in the United States ahead of the general elections, the Politico portal reported quoting a disclosure by the Department of Justice.

Certain US firms or employees are required to file a public financial disclosure report to the Justice Department, reports bdnews24.com.

According to the Politico report, Abdul Sattar of the Bangladesh Nationalist Party (BNP) has hired Blue Star Strategies and Rasky Partners to lobby the Trump administration on its behalf ahead of parliamentary elections in Bangladesh.

“Blue Star Strategies will engage in message development and narrative; outreach to elected and appointed US Executive Branch officials; outreach to US Congress; International Financial, Health, Labor, Human Rights, Women's Empowerment and Election Monitoring Organisations; Public Policy Institutions in the US; former US officials and ambassadors; the private sector and diaspora community,” it said citing the Justice Department disclosure.

Rasky Partners is working as a subcontractor to Blue Star and will receive payments worth $10,000 a month in August and $15,000 a month for the rest of the year.

The BNP is at loggerheads over the oversight of the next general elections with its main rival the ruling Awami League.

BNP Secretary General Mirza Fakhrul Islam Alamgir, who is in the United States, could not be reached for his comment over the appointment of lobbying firm.