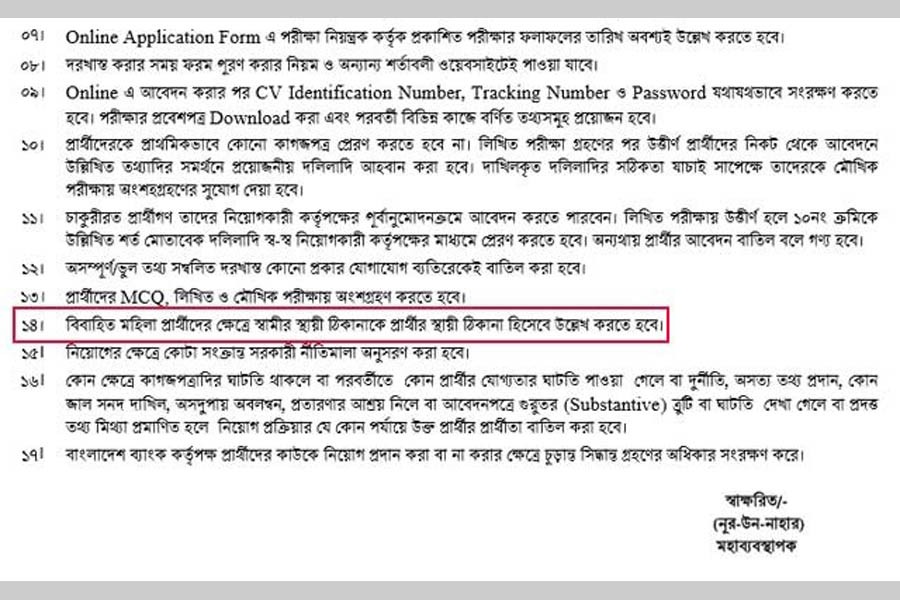 The Bangladesh Bank (BB) has drawn flaks for asking married female job applicants to mention their husband’s permanent address as their own in a circular.

“A married female applicant must mention the permanent address of her husband as her own,” reads the point No. 14 of the circular signed by General Manager Noor-Un-Nahar.

Netizens reacted angrily to the circular on social media.

“It’s neither realistic, nor is it contextual,” Nasimun Ara Hoq Minu, president of Bangladesh Nari Sangbadik Kendra, an organisation of female journalists, told bdnews24.com on Thursday.

“It’s not contextual because the employers must see only the applicant’s eligibility, not their marital status,” she argued.

“And there is no such rule in any government job. It’s an applicant’s personal matter what permanent address they will give. They can use the in-laws’ address if it’s necessary,” she added, noting that many women may have a bad relation with their in-laws.

“But we will see to it that no one faces any problem. We will request the related department to take steps in accordance with the applicants’ demands,” he said.

ASOCIO award handed over to PM