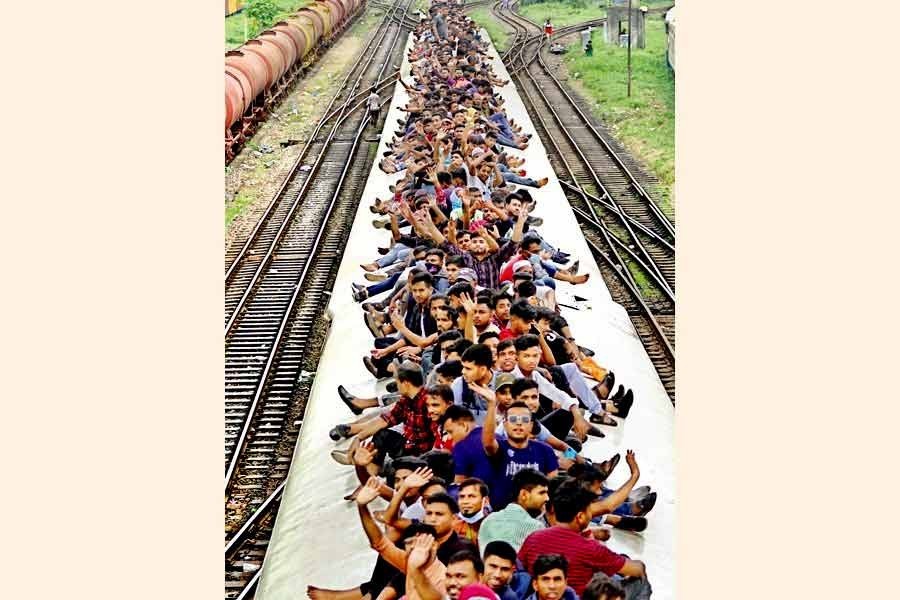 In a report submitted to the High Court, the authorities said, “Instructions have been issued regarding the suspension of passenger boarding on the roof of the train. A monitoring cell has been formed by the General Managers (East and West) of Railways in this regard. Round-the-clock monitoring continues in this regard.”

It also states that “The concerned departments have been given instruction to stop the black marketing of train tickets completely. A monitoring cell has been formed by the General Managers (East and West) of Railways in this regard. Monitoring continues to prevent black marketing of the tickets.”

Special fencing is being constructed at 50 Railway stations to prevent passengers without tickets from entering the stations, the report also said, adding a process is underway to crosscheck National ID cards with the Election Commission's database at the time of ticket purchasing.

The report was submitted on Sunday to the High Court bench of Justice Md Nazrul Islam Talukder and Justice Khizir Hayat complying with its earlier order.

Earlier on July 21, the High Court bench on a Suo Moto (voluntary) move asked the Bangladesh Railway to stop carrying passengers on the roof of the trains. If this dangerous travelling is not stopped, the court has warned the concerned that it will take tough actions will be taken against the rooftop travellers.

At the same time, the High Court wanted to know what steps have been taken to stop black marketing and mismanagement of train tickets. The Railway authorities were asked to comply with the queries within July 31 of this year.

Complying with the court asking the Railway authorities submitted the report in the High Court citing information including the implementation of court directives, improvement of passenger service standards, etc.

Deputy Attorney General AKM Amin Uddin Manik placed the report in the court on behalf of the Railway authorities, who send it to the state law officer on Saturday.

Advocate Khurshid Alam Khan appeared before the court on behalf of the Anti-Corruption Commission (ACC).

The High Court will pass the necessary order over the issue on next Wednesday.

The High Court bench on July 20 became curious about the issues after they noticed the protest of Dhaka University student Mohiuddin Rony demanding an end to irregularities and mismanagement of the Bangladesh Railway.