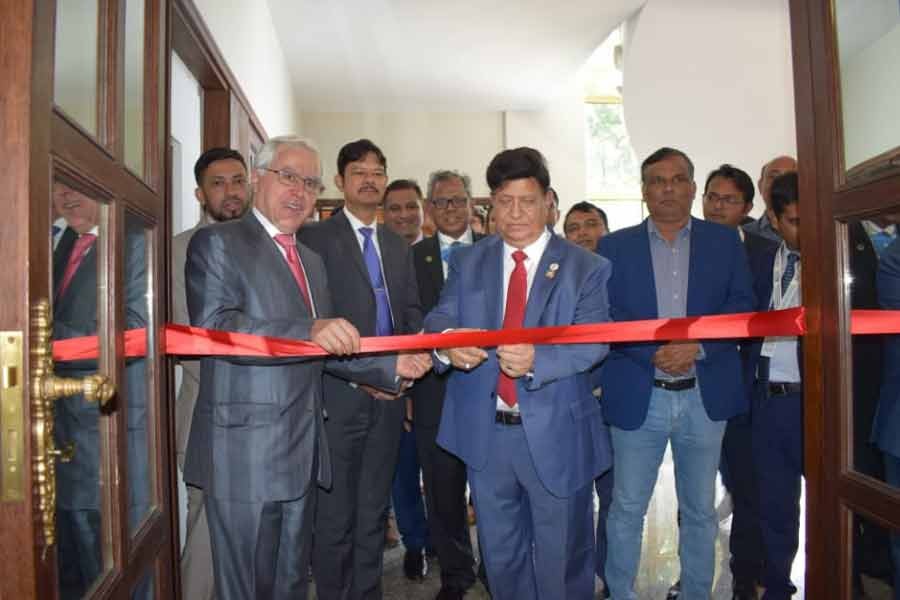 Foreign Minister AK Abdul Momen has formally inaugurated the new chancery building of the Bangladesh Embassy in Lisbon, the capital of Portugal.

After unveiling the inaugural plaque and cutting the ribbon, Foreign Minister Momen paid homage to the Father of the Nation Bangabandhu Sheikh Mujibur Rahman by placing a floral wreath at his mural portrait placed on the wall of the chancery building.

Portuguese guests congratulated the Bangladesh government on securing a permanent address of Bangladesh in Lisbon.

Ambassador Tarik Ahsan said that permanent chancery building had been a long-felt need, as the workload of the embassy has increased manifold, due to its increased activities in consular affairs as well as in pursuit of economic, cultural and public diplomacy.

He viewed that the new chancery building would contribute in a big way to strengthening the bonds of friendship between the people of Bangladesh and Portugal. He expressed his gratitude to Prime Minister Sheikh Hasina for her directives to establish the permanent Chancery building and Ambassador’s Residence in Lisbon.

Ambassador Álvaro Mendonça e Moura in his remarks congratulated the Bangladesh government and all the expatriates living in Portugal at this historic moment.

He opined that the friendly relationship between Bangladesh and Portugal would be elevated to a higher level with the inauguration of the permanent chancery building in Lisbon.

Foreign Minister Momen viewed that the Chancery building symbolises the presence of a transforming Bangladesh that has just celebrated 50 years of its independence last year, and stands poised to enhance its global footprints by surging ahead with its value-based diplomacy in pursuit of its national development aspirations.

He said, “This building is not just a mere construction or enclosure, but bears our message to our friends in Portugal that we value our shared history, that we cherish our present-day human connectivity, and that we look to our shared future with much anticipation and optimism.”